Debby and Larry Kline, Collaborative Artist - Provocateurs Talk about Themselves 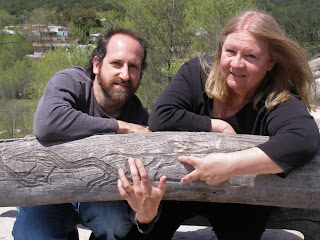 Debby and Larry Kline are in love – their marriage and relationship is at the core of their collaborative art projects.  Having been together for over 25 years, and working closely on the art they create, the Klines finish each other’s sentences and converse like a well choreographed dance.

Born and raised in Indianapolis Indiana, the Klines were introduced by a friend while both studied at Indiana University.  They immediately connected and as they describe it, they began to talk in “twin babble” – with a remarkable sense of mutual understanding of one another. Both studied painting, and talked of all night painting stints until they were kicked out of the university studio by a security guard. They noted one professor, Steve Manheimer as mentor during their college years.  Described as a tough but brilliant teacher, Manheimer would rip up student drawings and paint on their paintings, constantly questioning their intent and teaching the Klines to more clearly understand their artistic process and goals for their work.

Both Klines worked at the Indiana Museum of Art during and after college, though Larry left for graduate school at the Maryland Institute of Art.  It was during this time that Larry’s work shifted from painting into sculpture. Having broken his right hand, he was forced to draw and paint with the left, and though he became good at rendering with his left hand, he began experimenting with using found objects to create sculpture, and would use ‘throw aways’ from other student work and incorporated those into his painting and 3-D work. During this time frame, Debby stayed working at the Indianapolis Museum of Art as an Assistant Registrar, handling the insurance, legal, shipping, safety and security of art works in the collection and works shown at the museum. After receiving his MFA, Larry returned to Indianapolis to work at the IMA doing photography and teaching classes.


Faced with college debts and the recent death of her daughter from Leukemia, Debbie left her art behind for a time, and received a good offer to be Associate Registrar for the Museum of Contemporary Art in  Chicago, and she and Larry decided to move there.  Both Klines sited Joe Shapiro, one of the founders of the Museum of Contemporary Art as a mentor.  A generous teacher and major art collector, Shapiro taught the Klines that collecting art is do-able – and that collectors are “caretakers” of their art.  He also emphasized the importance of selecting art that is not a ‘quick read’ – art that requires more than one viewing to understand. After five years in Chicago and paying off debts, the Klines were ready for a new challenge. Debby floated her resume at one of the national museum conferences and was hired as Deputy Director of the California Center for the Arts in Escondido. During her time there, Debby also handled the Registrar position and was Co-Acting Director for a time. Faced with budgetary and management issues, there were major staff cuts and the Klines looked for new jobs. The Klines currently teach 3-D Design at the Design Institute of San Diego and Larry also teaches 3-D Design and Perspective and Rendering at Grossmont College. They also lecture widely on subjects ranging from the nature of creativity to the art of the Holocaust.


Since they have lived in San Diego County, the Klines have developed a rich and engaging collaborative studio practice.  Their process involves a lot of brainstorming of ideas and ‘play’ as part of their art-making- often keeping a sketchpad in the car for bouncing ideas around on  long trips. They have a strong belief in experimenting with materials and learning self taught new skill sets – sometimes on youtube, as part of each project. They often seek out equipment at garage sales – for example, they found a ceramics kiln for $75  and free molds for their installation works. In order to develop their projects, they hold ‘business meetings’ with each other in order to plan and determine practical decisions about each of their individual responsibilities.

Self described ‘Provocateurs”, the Klines use beautiful object making and humor to reel people into challenging their own preconceptions about subjects as wide-ranging as healthcare, religion, politics, and commercialism. Their work is as unique as their relationship – They have similar aesthetic sensibilities and share the goal of wanting to help people think differently.  A prime example is their project “The Electric Fields of California” which is an environmental work exposing the powerful Electromagnetic fields surrounding power lines by illuminating fluorescent sculptures without direct hook up to a power source.  This and more of their projects past, current and future can be viewed at: www. jugglingklines.com  In 2013, they won the San Diego Art Prize. They will have several booths at the upcoming San Diego Art Fair in November, 2013. Their show "Provocations" opens Thursday evening, September 5th, 5-7 pm, lecture to follow, at Mesa College, San Diego.
Artful Life By Cathy Breslaw - Debby and Larry Kline, Collaborative Artist
Posted by Patricia at 10:08 PM

Email ThisBlogThis!Share to TwitterShare to FacebookShare to Pinterest
Labels: Artists