This month I am writing a very simple post about an observation that I hope will make others have a guilt free art life.

I lived in London for 35 years and London has so many visual arts exhibition, fairs and events that you could never attend them all. I took my students out every Friday to a new major art display at a museum and never ran out of choices. The result was a strange confidence. There is always something to see and do and yes, it is true, when you are tired of London, you are tired of life.

The result of all this plenty is what I am now feeling in San Diego. When I first arrived and started to make friends and find out what was going on, I tried to attend all the events I could. Sometimes it was quite a thin selection, and I was pretty much able to see everything I was told about.

But over the last 19 years, San Diego has exploded with art events. Now we are spoiled for choice. Now no matter how hard you try, you could never show up for everything that everyone you know creates. So now I am more relaxed. I know there will always be something to see and I know that no one expects me to show up for this multitude of riches as it is just humanly impossible. Now I enjoy a guilt free art life in San Diego.

So go out and see some art today, and if not today, then tomorrow. There is plenty to go around.
Posted by Patricia at 10:35 AM 0 comments

It is a particular sensitivity to ‘place’ and  ‘light’ that unites the work of Anthony Friedkin, Steve Kahn and Grant Mudford in their current show together at Joseph Bellows Gallery. The images of these Los Angeles based photographers elicit an emotional response whether it be the Pacific
Ocean waves in Friedkin’s images, the long dark shadowy corridors of old apartment buildings
in Kahn’s images or the stark sharpness and contrasting light used in the urban landscape images of Grant Mudford. Friedkin’s wave images are often abstractions that speak to the structure and textures of waves portraying their power and force as they move toward shore. There is an intimacy, and a personal knowledge present in these images that only someone who surfs or spends a lot of time in the ocean could capture. The beauty of the waves are further enhanced by these images being in black and white, allowing the ‘light’ to glisten and create form as the waves take center stage. The subject matter of Steve Kahn’s images – that of dark corridors in an old building wouldn’t normally grab attention, but Kahn has built a quiet mysterious beauty into his photographs.  Observers are drawn to his sense of deep space using only one-point perspective, as well as his obvious keen familiarity and personal connection to these hallways.  Studying the light, focusing on the textures of the walls, ceiling lights, doorways, carpets and floor patterns has added to the development of these images. In this ‘Corridor Series’, Kahn sets up a formal composition strictly adhered to in all the images. This use of formal composition is also evident in the work of Grant Mudford. His outdoor anonymous black and white urban landscapes of buildings find identity and personal meaning by drawing attention to a connection to patterns in architectural forms, adjacent greenery and sometimes names or words on buildings. ‘Drawn to Light’ brings together three California photographers who investigate the psychology of ‘place’ and our relationship to it.

Posted by ARTFULLIFE BY CATHY at 9:12 AM 0 comments

What Remains: Debris and Detritus in Fine Art at SDAI

What Remains: Debris and Detritus in Fine Art
Sat May 30  to July12

The San Diego Art Institute goes from strength to strength. This very popular show (they were lined up around the block to get in at the opening night) takes a very popular theme of up-cycling and shines because of the quality of the works in the show. You are greeted by a new snazzy sign at the entrance to this Balboa Park institution which managed to re-invent itself under the directorship of Ginger Porcella. Space 1439 refers to the newly cleaned up and elegant shop at the top of SDAI which everyone can enter for free. It gives you a clear view of the some of the art below. For a $5 public entrance fee this is one of the bargains of the park and we would encourage many of you to buy membership and attend often for free. 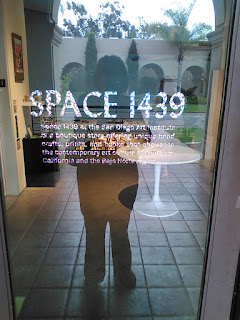 Posted by Patricia at 1:29 AM 0 comments