Great Spanish Masters from the Pérez Simón Collection at the San Diego Museum of Art July 09, 2011 through November 06, 2011.

The San Diego Museum of Art is rightly proud to be the only U.S. museum to show this survey of Spanish master artworks from the 16th century to the 1970s with 64 works out of a collection of approximately 2000 owned by the Pérez Simón Foundation. The collection, normally housed in the private estates of Juan Antonio Pérez Simón in Mexico City, Spain and San Diego, was started in 1970 and has already traveled to Paris and Quebec on loan.  The actual show covers over five centuries of art as we travel chronologically through religious themes to court paintings, Impressionism, Symbolism and ends with the Surrealist and Minimalist movements.  In this report, I would like to concentrate on the tiny shining stars of the show before the blockbusters.

There was only one El Greco but it is a sweetheart miniature of the head of Christ. See in real life and do not judge it by the reproduction here. The light in back of the head and the gleam in the eyes is luminous. The whole world of religion belief is caught in this tiny rectangle of oil on paper. 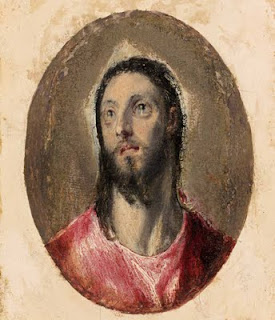 Discovering “new to us” Spanish artists is one of the educational joys of the show. Ramón Bayeu delights with a matched set of casual figures. 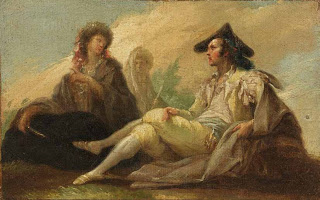 Ramón Bayeu
Seated Majo and Maja Ca. 1778 or 1784
Oil on canvas / 14 × 21.5 cm
The thick layered oil is slathered on this tiny canvas making it an impressionist tour de force. 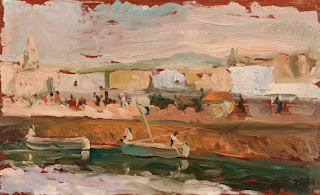 Joaquín Sorolla
Fishing Port, San Sebastián Circa 1903–08
Oil on canvas I 19 × 31.8 cm
Again, you must see this to view the vital energy of every line of this small Picasso. 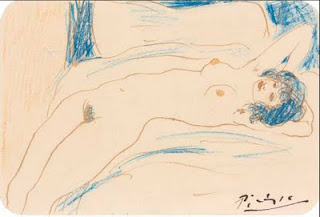 You need a microscope to see the details in this miniature landscape populated with all the regular Dali figures. 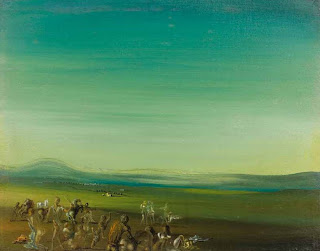 Back to 1640 to this still surreal floating image of St. Mary in her moment of ecstasy. 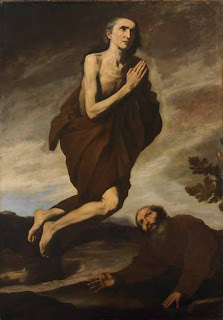 Jusepe de Ribera
Saint Mary of Egypt in Ecstasy, Ca. 1640
Oil on canvas / 177 × 123 cm
Amazingly, this Goya was only purchased 10 years ago, as almost all his work is in museum collections. The surround of this oil on wood is exposed and although the image is in perfect condition and newly varnished, it is showing the hand of the artist as he over strokes on to the surround that was touching, intimate and memorable. 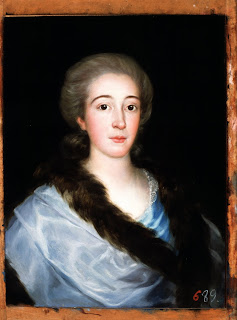 Francisco de Goya
Doña María Teresa de Vallabriga y Rozas, 1783
Oil on wood / 66.7 × 50.5 cm
This work was dubbed the Spanish Mona Lisa by the SDMA Mexican director Roxana Velásquez Martínez del Campo, who toured us around the show. It appears on the cover of the catalog and is by a relatively unknown artist to Americans. It was billed as a symbolist portrait but I think you just need to look at those eyes and the words don’t need to prove anything. 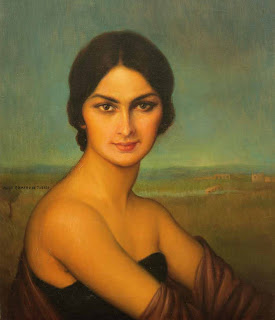 Julio Romero de Torres
Portrait of a Lady, Ca 1925−30?
Oil on canvas / 62.2 × 52.1 cm
The museum is working hard to make all traveling exhibitions which come here relevant to SD and so this work was chosen as it is Picasso new mistress Francois Gilot long before Jonah Salk won her heart. 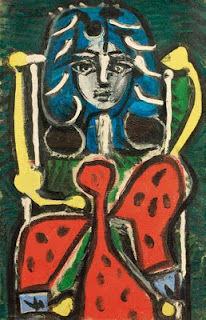 Pablo Picasso
Françoise in an Armchair, 16 March 1949
Oil on canvas / 41.6 × 27.6 cm
The two Christ figures by Dali will be show stoppers, this one because of the difficult perspective and the next pair with it mirror structure designed to trick us into seeing a 3-D image. These are now old tricks and those of us who have grown up with Dali know he is not that trustworthy. But the Dali is above all a showman. 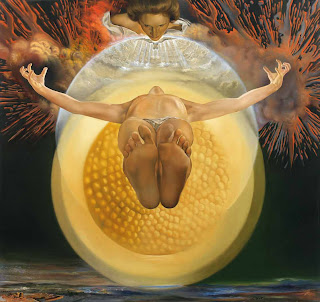 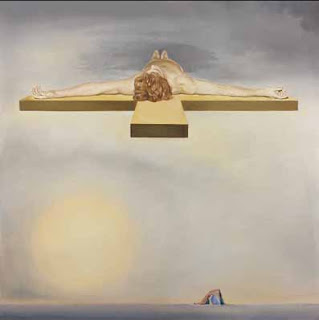 Salvador Dalí
Gala’s Christ, 1978
Oil on canvas and wooden structure with mirrors
100 × 100 cm (each panel)
I am a self declared huge fan of Tapies, and as the last picture on the floor, this one is like a clean breath of air after the Picassos, the Miros and the Dalis. 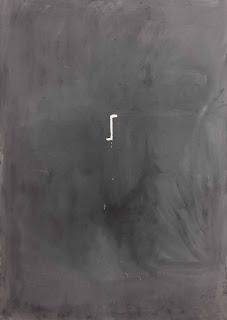 Antoni Tàpies
Large Gray Paper with White Symbol, 1965
Acrylics on paper mounted on canvas / 193 × 137 cm
My great thanks go to John Marciari Curator of European Art, Tom Gildred, President of the Board of Directors, and Helen Mola, Madrid, consultant to the Pérez Simóns for answering all my questions.