The current exhibition at the San Diego Museum of Art, Peripheral Cognition, comprised of small sculptural works by Ron Nagle, was organized by Ariel Plotek, Associate Curator of Modern Art at the museum. Plotek first became aware of sculptor, Ron Nagle’s work at the Venice Biennale in 2013, and this exhibition is Nagle’s first major museum show. The mixed media and ceramic works in this show span 39 years.  The exhibition required special displays which were custom built in collaboration with the artist. Created for specific eye-level viewing, each small ‘hand-sized’ piece has been deliberately placed and spaced within the spot-lit protective glass displays, in overall darkly lit smallish rooms.  The environment within which the art pieces are shown creates a certain drama, highlighting the ‘preciousness’ of the individual works of art as the viewer is drawn into Nagle’s world. The combination of tiny vessels, cups, organically shaped forms and precisely hewn sculptures share space with one another. Nagle’s works are each truly one-of -a -kind. Originally influenced by the sculpture of Ken Price and ceramicist Peter Volkos, Nagle’s work also bears connection to Japanese tea bowls and ichibana, as well as to the modern, post-modern and pop-art movements. Important to note is that Nagle is also a musician/songwriter which is evident in the rhythm, movement, textures and color choices of the sculptures. There is also an underlying sense of humor evoked in many of the works as well in Nagle’s carefully selected titles for his pieces.  “Lobster Boy”, “Grim Trimmins”, “Sometimes Better to Lull Suspected Person with False Sense of Security” and “Car Bomb” are some of his provocative titles - begging the viewer to take an even closer look at the work, as we search to understand the connections between title and meaning. One entire wall is dedicated to a series of his drawings on old-school yellow and pink legal pad paper. These small drawings provide a glimpse into Nagle’s thoughts and ideas as he develops his work. It is visually and emotionally exciting and fun to experience these intimate, diminutive works that challenge, tease and inform us about the world of Ron Nagle’s imagination. In referring to his work, Ron Nagle expresses his vision best:
"A great song and a great piece of art would have in common the ability to evoke some form of emotion in the listener that they haven't quite gotten before. If you've already heard it or already experienced it what's the point of looking at it or listening to it?"

John Pfahl’s Picture Windows is a series of over twenty-five 16” x 20” vintage Ektacolor prints which were made between 1979 and 1981. All photographs were shot within a darkened room through a picture window, from homes, hotels, and businesses all over the west and east coast of the United States. In the image entitled ‘Two Balanced Rock Drive, Springdale Utah”, Pfahl leaves behind a Polaroid print in the foreground, giving us an important clue to his process – nothing is left to chance, as Pfahl meticulously sets up his shots with careful attention to time of day, season and place. He ‘frames’ his images as a painter
would in composing a still life or landscape prior to painting it.  Since the early Renaissance, painters have transformed the picture plane into open windows for symbolic, emotional or compositional purposes.  In Pfahl’s case, he has brought the ‘indoors’ and ‘outdoors’ together into one plane by his method of image-making. The overall shape of the glass windows, and size of the verticals and horizontals of the window panes are integrated into the outdoor landscapes – seamlessly and seemingly effortlessly accomplishing Pfahl’s vision. Though there is a certain drama to the purposefully set darkness of the  interior, framing the well lit exterior city or mountain landscape, the content of these images appear cool and detached.  Pfahl’s consistently sharp images draws our attention to landscapes we may have seen, but not quite in the same way.

Posted by ARTFULLIFE BY CATHY at 3:26 PM 0 comments

San Diego City College Gallery's  newest exhibition is Mix and it is worth the climb off of C Street near 14h to room 314 of the Arts & Humanities building to see not only the art but the incredible new 2,400-square-foot exhibition gallery. The gallery is run by the full time visual arts staff members and I was lucky to be shown around by Terri Hughes-Oelrich who is energetic and passionate about the space and the art scene in San Diego. City college Gallery only started in Aug but has had three shows already and this exhibition of Allison, Renshaw, Vicki Walsh, Stephen P. Curry and John Dillemouth fills the space with quality art work. This show was curated by Wayne Hulgin and it is elegant and engaging. The previous show of ceramics was curated by YC Kim.  Watch for future pop up shows and the use of the outside sculpture garden (if you can call a concrete fenced forecourt a garden!) as well as the faculty and student shows one expects from a college gallery. I was impressed with the vision Hughes-Oeirch has for the future as she and her colleagues aim for relevance in an ever changing art world.  For more info:  Email citygallery@sdccd.edu

Posted by Patricia at 8:57 PM 0 comments

Every year, this wonderful organization Synergy Art Foundation, holds a fundraising gala evening to raise money to support artist in need and other very worthy project which use the arts to support a non-profit cause. This is the only safety net that most artist might have in times of trouble. The artists come out in force to support this cause and also because it is one of the best parties of the year. This year was the first in the World Beat center and it was full and rocking.

This performance heavy event beginning with Sven Erik Seaholm, multi-talented song writer/performer/ production artist followed by Lily Noden's Dragon Knights stilt walkers. Lily is a long time supporter of Synergy and her performers are thrilling to watch with their poetic gestures and interactive element. For this event they were all in white and absolutely huge with floating wings. Next we were treated to an interactive drumming circle led by the expert Nan Obafo Yaw Asiedu from Ghana. Drums were distributed to many in the audience and after a brief set of instructions off they went with the heart thumping energy that stirs your soul. The wonderful feather bedecked costumes of the Aztec DanceTroupe with a traditional performance, whirled through the room accompanied with the heady smell of incense. This was followed by two exotic and gorgeous belly dancers from the Arabina Dance Company. The audience was seduced. 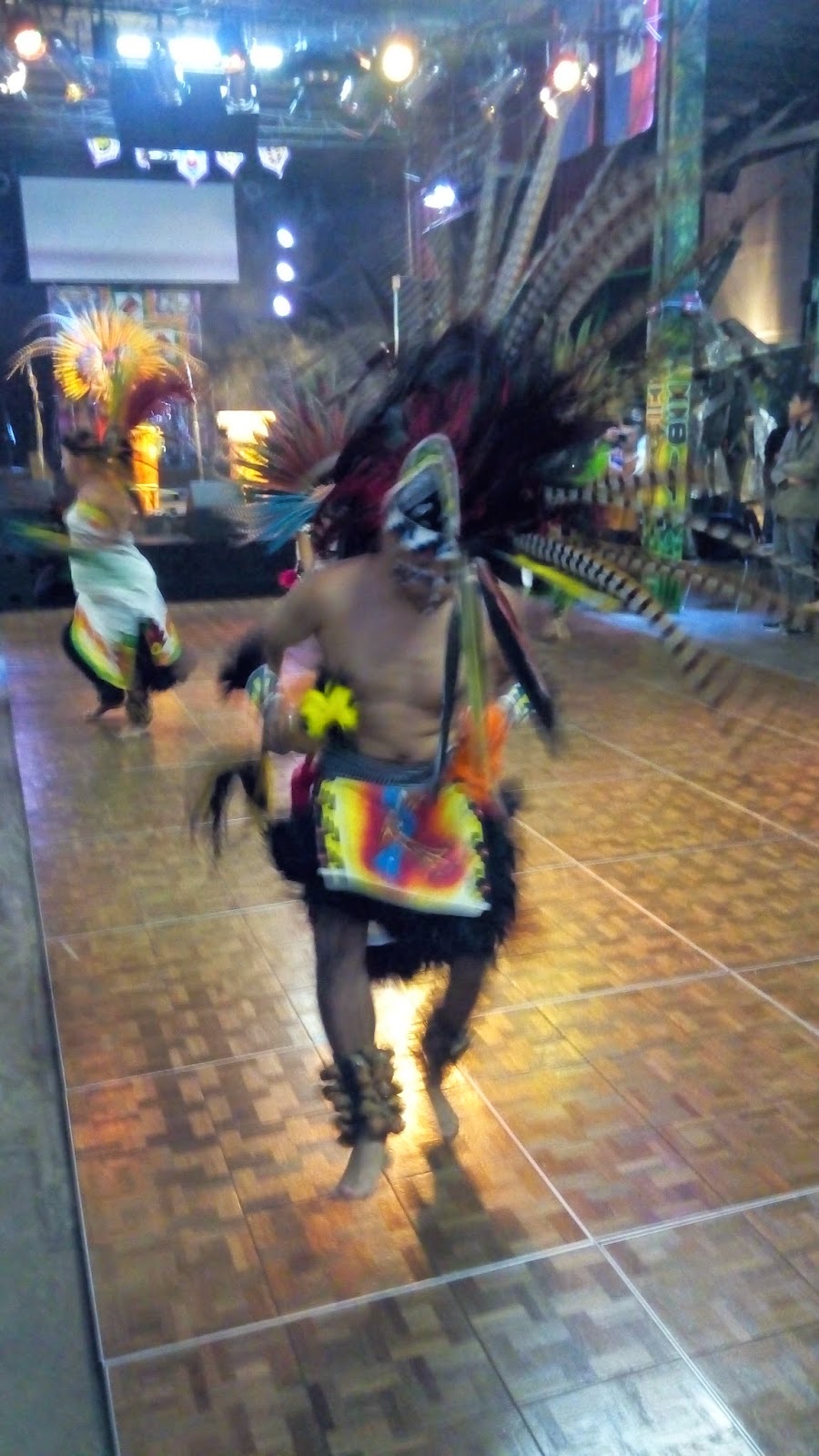 The dance part of the evening kicked off  Todo Mundo  “Best World Music Album” 2011 and 2014 winner of the San Diego Music Awards, blending flavors of Reggae, Samba, Gypsy, and Middle Eastern rhythms.  Then the kick ass D.J.,J Cush of Pocket Underground completed the night.  WBC’s amazing vegetarian restaurant, the Prophet. supplied extra food for those who wanted more than the delicious snacks made by the Synergy volunteers. Good wine and beer were available at very reasonable prices.


One of the best parts of the evening is always the Blanks to Beauty silent auction of small format artworks by top local artists, juried this year for the first time by Robert Pincus and Mark E. Lugo. These two well known art professionals chose 31 works from the over 100 submitted. Lucky for us, those works which did not make the cut will be displayed at the Solana Beach City Hall Gallery in early January so those who missed this event will have an chance to see and purchase works that all measure only 10 by 10 inches and start at $100. This will be an extra opportunity to support Synergy.

Synergy Art Foundation has played a vital role in supporting our local arts community by offering grants to San Diego County artists of all disciplines at a time of crisis.  The organization also provides arts educational programming and healing arts to under-served and at-risk populations. Synergy’s objective is always to unite the local artists and arts organizations, collaborate whenever possible, and raise awareness about the value of arts and culture in our City.

World Beat Center is a non-profit institution in Balboa Park dedicated to African and African-American arts and culture through Music, Art, Dance, Education & Technology. Their main goal is then to create unity within diversity.