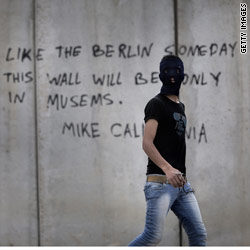 A+ Art Blog: Putting Our Tax Dollars to Work

Putting Our Tax dollars to Work or what I would do if I were Arts and Culture Commissioner.  Okay, I will probably never be a commissioner for Arts and Culture, but I had a good fantasy while I was in the shower and thought I would share some thoughts. You never know when seeds of ideas might sprout. I have no doubt things need to shake up a bit and these ideas would certainly do that.

Now it is your turn. Do you have a fantasy of what you would do as commissioner? Blog away.
PS This is written with respect to the current Commission for Arts and Culture. It is a hard job, we know.
Posted by Patricia at 2:02 PM 0 comments


David Fobes will present a new series of works that explores themes of code, space, geometry, and color.  He has developed a technique using the unlikely medium of duct tape, a material he manipulates to create fascinating illusions of color and three-dimensional space.  David Fobes is a professor of art at SDSU and his work has been included in many local, national and international exhibitions.
http://misterfobes.com/index.php
Athenaeum Music & Arts Library
1008 Wall Street
La Jolla, CA 92037-4418
858 454 5872
www.ljathenaeum.org

MCASD STAFF, PATRONS "SIT IN SOLIDARITY" FOR AI WEIWEI
24-Hour Sit-In Inspired by Ai Weiwei's Marble Chairs Featured in Current Exhibition
San Diego, CA- The Museum of Contemporary Art San Diego announces a 24-hour protest to call for the release of detained Chinese artist Ai Weiwei. On Thursday, May 19, a broad roster of MCASD staff, members, and community leaders will participate in a silent yet symbolic event.
Beginning at 11 AM on Thursday, May 19 and continuing through 11 AM on Friday, May 20, volunteer participants will occupy two traditionally styled Chinese chairs for one-hour periods. This 24-hour sit-in references Ai Weiwei's sculpture series, Marble Chair, two of which are currently on view in the Museum's exhibition, Prospect 2011. These impressive yet haunting marble sculptures were acquired on May 11 by the Museum's International and Contemporary Collectors.
Internationally acclaimed Chinese artist Ai Weiwei was detained April 3 at the Beijing airport as he attempted to board a flight to Hong Kong. MCASD has stood alongside members of the international art community in voicing its disapproval and encouraging action from members, the community and the government to call for the artist's release.
Hugh Davies, the David C. Copley Director and CEO considers the silent protest a way to express the Museum's support of the artist, whose Beijing studio Museum supporters visited just months before Ai's detention.  "As the time of his detention lengthens, we grow more concerned for Ai's welfare and want to make a collective gesture in support of his release," said Davies.
Members of the community are invited to participate by offering an hour of their time to sit in the replica chairs during the 24-hour demonstration. Volunteers can RSVP on Facebook at www.facebook.com/mcasd or by emailing mdaniels@mcasd.org with the subject line "Sitting in Solidarity," and will be contacted to confirm a time.

from the SLOG News & Arts and Jen Graves

Derrick Cartwright is leaving SAM, he wrote on the museum's blog today.

This comes as a total surprise to me. I don't know what happened. Cartwright's statement says he will take time to refresh his love for art history rather than focusing on institutional administration, which he has been doing for several years, and to be with his family.

In Cartwright's short tenure here, he was very well-respected by artists, pretty much loved by staffers (even though he had to make layoffs due to the WaMu crash's aftermath), and colleagues enjoyed working with him. He arrived in summer 2009, less than two years ago. (Here is what I wrote about him then.)

Picked RAW: "Behind What It's In Front Of" at Quint Contemporary Art

from the press release

Opening reception: Saturday, May 21st from 6 to 9pm

Quint Contemporary Art is pleased to announce the opening of our new exhibition space (7547 Girard Avenue La Jolla, CA 92037) with Behind What It’s In Front Of, a show conceived by Roy McMakin to explore his many decade long fascination with the paintings of John McLaughlin. This will be McMakin’s sixth exhibition at Quint Contemporary Art. Please join us for an opening reception with the artist on Saturday, May 21st from 6 to 9pm.


From the recently released book Roy McMakin When is a chair not a chair published by Rizzoli, Michael Ned Holte offers this:

Undoubtedly, McMakin’s body of work can (and should) be placed in an artistic linage that would include John McLauglin, Robert Irwin, and Charles Ray – a linage of shared interest in formal issues of space and perception that seems to have developed on the West Coast, which McMakin has called home for three decades. McLaughlin’s spare, immaculate, geometric paintings precede and predict minimalism. Many of the paintings relay on a reduced palette of black, white, and (sometimes) gray, and a modicum of rectangular shapes to efficiently construct figure-ground conundrums that a viewer can never fully resolve. Many of McMakin’s furniture pieces, including a desk and a dresser follow closely from McLaughlin’s tactics; for example, they employ black lines that are nearly indistinguishable from the negative voids or gaps.

That moment – to this…
may be years in the way they measure,
but it’s only one sentence back in my mind -
there are so many days
when living stops and pulls up and sits
and waits like a train on the rails.
I pass the hotel at 8
and at 5; there are cats in the alleys
and bottles and bums,
and I look up at the window and think,
I know longer know where you are,
and I walk on and wonder where
the living goes
when it stops.

from ArtSlant Chicago and Abraham Ritchie 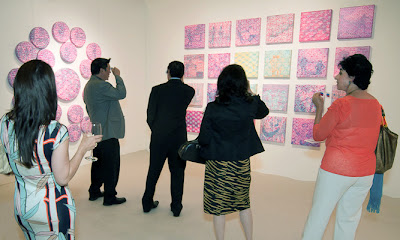 If it is true that a rising tide raises all ships
, then Art Chicago proved this year that lowered admission standards diminishes all the art on view.

Everywhere glossy and slick surfaces abounded, indicating just how shallow the “return to beauty” has turned out to be. As Joel Kuennen writes this week on ArtSlant:Chicago, nostalgia was exploited as repackaged in pure commodity to entice prospective buyers. Similarly there was a surfeit of photorealist paintings and still lifes this year almost all without a hint of criticality or irony, and almost none able to compete with even the lesser of their art historical antecedents. 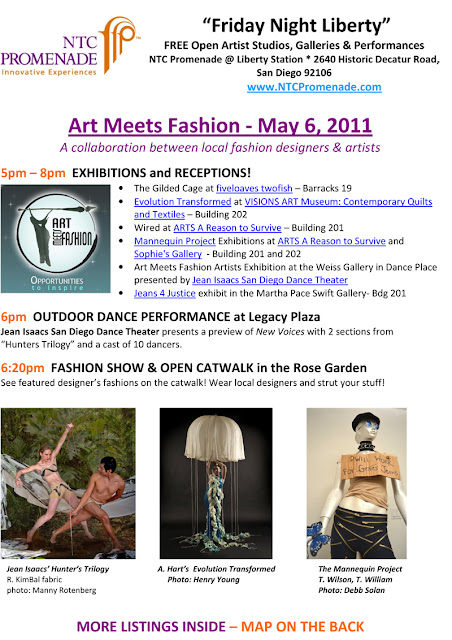 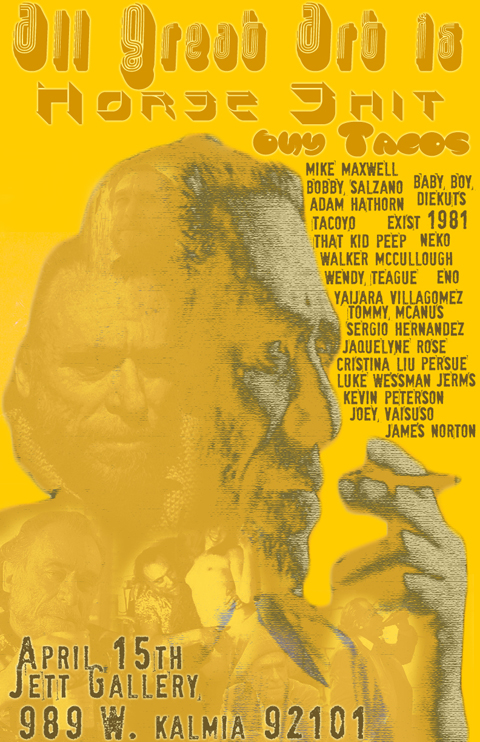 Images - ﻿Walker McCullough
Posted by Kevin Freitas at 11:32 AM 0 comments

Daily Art Nag for May 2, 2011: Former registrar at the La Jolla Museum of Contemporary Art (back when), leaves the Laguna Art Museum

from Culture Monster and Mike Boehm


﻿
﻿Bolton Colburn is leaving the Laguna Art Museum after 24 years — including the past 14 as its director.

His resignation, effective May 13, is voluntary, Colburn and Robert Hayden III, president of the museum’s board, said Monday, and reflects no internal friction at the seaside institution that’s devoted to California art and traces its roots to 1918, when a group of painters in the Laguna Beach art colony formed an association that eventually spawned a gallery, then a museum.

Read more and here - (while still at Laguna)

This campaign is a collective of artists, fashion designers, sexual assault survivors and retailers coming together to raise awareness and inspire change by creatively sharing real stories to open channels for healing and prevent future acts of sexual violence.


Come be a part of this innovative fusion of art, fashion and social action by visiting a boutique near you!


The jeans will be on auction for one month, in each store. Proceeds from the jeans go directly to local programs to help educate young people about social change, leadership and sexual violence prevention.


For more information and the full listing of artists, designers and participating boutiques go here:
jeans4justice.org