The Getty Museum has spearheaded and provided several grants for a large set of exhibitions and collaborations known as Pacific Standard Time: LA/LA. This ambitious project provides an awareness and dialogue across southern California about Latin American and Latino Art. From September 2017 through January 2018, Oceanside Museum is one of more than 70 cultural institutions in the region to participate. Organized and curated by Alessandra Moctezuma, UnDocumenta includes the work of six artists who wrestle with issues of immigration and the border, biculturalism, migration, labor issues and human rights. Expressing themselves through video, photography, sculpture, social engagement, performance and interactivity, the work of these contemporary Mexican, Latino and American artists from both Tijuana and San Diego provides fertile ground for important conversations that beg to be had in a geographic area where shifting cultural identities and nationalities are at the forefront of challenging social and political debate. Omar Pimienta’s Welcome to Colonia Libertad  is a participatory art piece that replicates the bureaucratic practice of acquiring passports. Pimienta sets up ‘mobile consulates’ where he exchanges a visitor’s expired passport and trades it for an artistic faux passport together with their new photograph and fingerprints,giving them access to his Tijuana neighborhood of Colonia Liberdad.  Teresita de la Torre’s 365 Days in an Immigrant’s Shirt  pays homages to undocumented migrants by wearing a plaid shirt everyday for a year – a shirt she discovered while volunteering for an organization that leaves jugs of drinking water in the desert for migrants trying to cross the border. Her process is documented in photographs and a sketchbook from her daily postings.

Claudia Cano uses public performance by dressing up as a house-keeper/cleaning lady named Rosa Hernandez.  Clad in a pink maid’s uniform, apron and wig, Cano sweeps public spaces including a park, museum and adjacent to the border wall, demonstrating through photographs her invisibility to oblivious onlookers, and highlighting the importance of immigrant workers to our economy. Ana Teresa Fernandez's video projection Borrando la Frontera shows the artist in a cocktail dress and high heels , climbing ladders as she attempts to paint the border fence in Playa de Tijuana a light powder blue creating an illusion of a disappearing border fence. Dominic Paul Miller created a trans-border community partnership with Tijuana’s labor rights group Ollin Calli. Using grant funds, Miller paid workers from Mexican maquiladoras to collaborate with him on his art project - a social engagement between factory labor and production, the result creating a series individual drawings. There is also a wall in the gallery where Miller documents the specific backgrounds of his Mexican participants, revealing the personal identity of his collaborators. Marcos Ramirez Erre installed a site specific piece by erecting a metal façade on the outside of the museum mimicking the border fence. This worthy and engaging exhibition tackles contentious topics in visually and intellectually stimulating ways. Several associated events are planned and can be accessed online at: www.oma-online.org/calendar

Posted by Patricia at 1:30 PM 0 comments

CHRONOS/KAIROS II: Recent Works by Shinpei Takeda is showing at Sergott Contemporary Art Alliance in Rancho Santa Fe opening on Sept 22 and showing until Nov 10 by appointment. "In ancient Greek mythology, Chronos is the linear chronological 'time' and Kairos is the 'time' - the right, critical moment specific to a space for something to occur. My work has dealt with finding the intersection of Chronos and Kairos, working with histories and memories while understanding how to adopt to the contingent circumstances. In this exhibition, I propose a series of works based on my intent to find the intersection of the sequential objective time and non-sequential subjective time." --Shinpei Takeda More info: 858.756.2377 info@sergottart.com

Shinpei Takeda was a house guest  for the last few days before this show opened in the charming gallery on Tom and Ann Sergott's property. It seems to be a win win for both the artist who was given full rein to display his work as he wishes in the space and for the Sergotts who had not only their first solo artist show but also their first artist in residence. Shinpei is a charming man, kind and considerate and full of passion and dedication to his art.  At the same time as this exhibition he has two shows in the Pacific Standard Time promotion in LA,  Shinpei divides his time between Tijuana and Germany and seems to constantly on the move. The same can be said for his work which changes and grows with each viewing. The gallery looked quite different with the walls arranged to hold the large weaving suspended partly from the ceiling. More intimate works pulled you further into his vision. I was struck by how some of the pictures were actually dramatic photographs of his other large installation hangings. 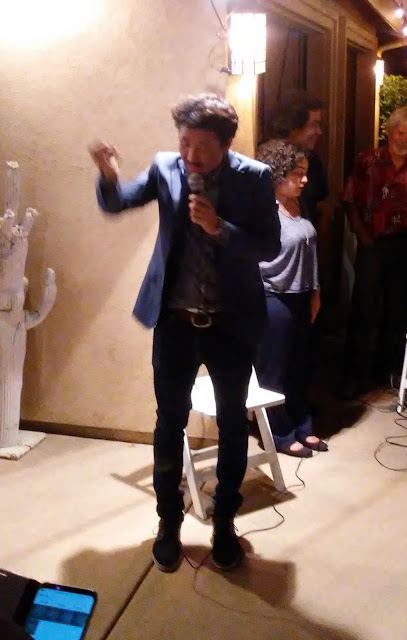 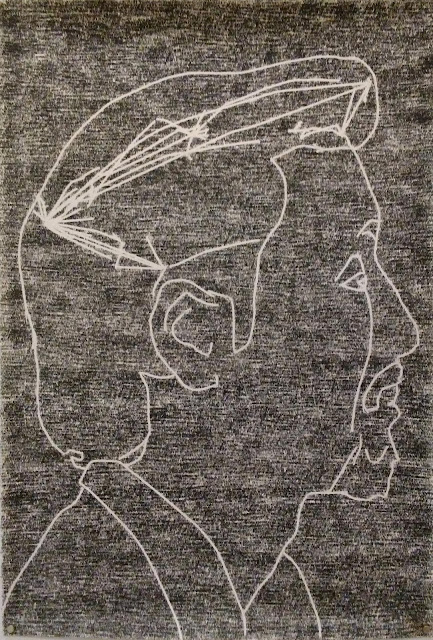 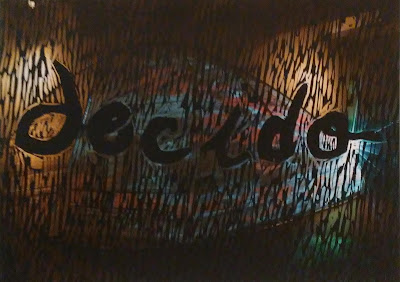 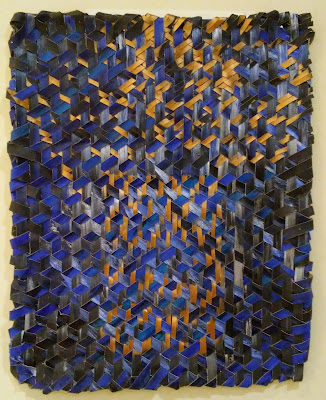 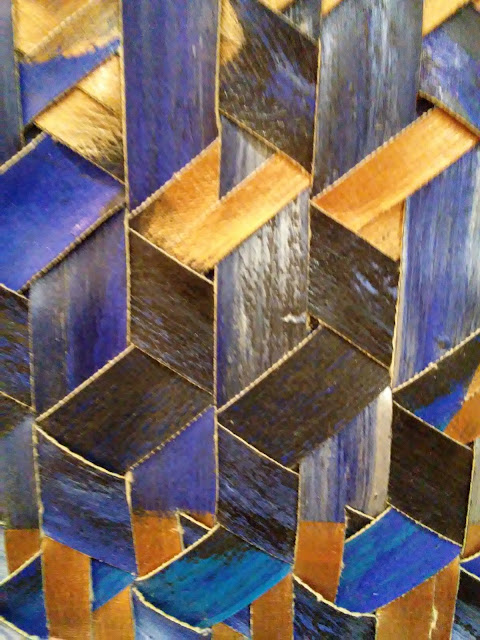 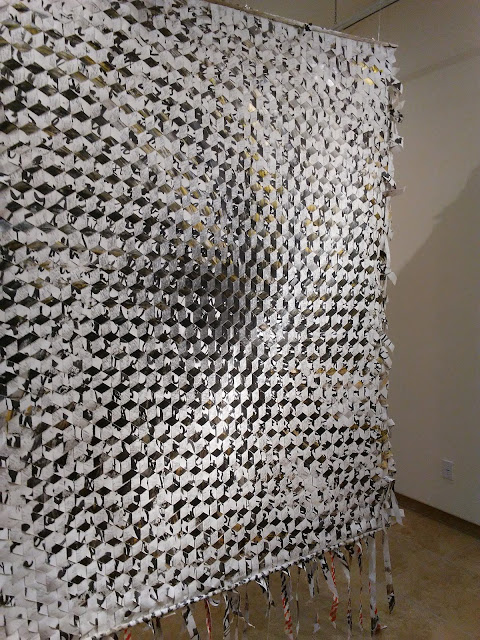 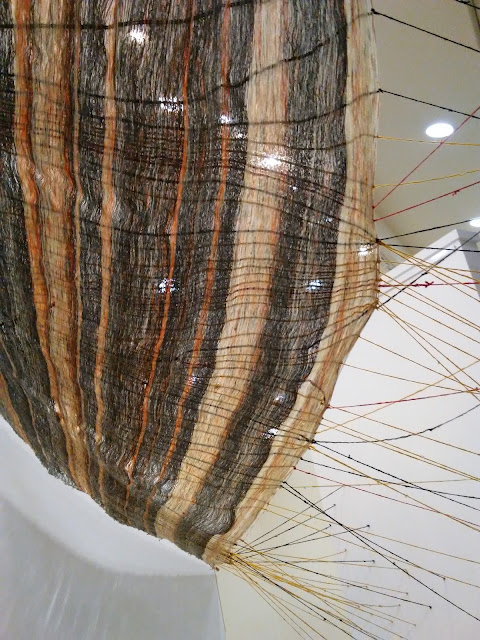 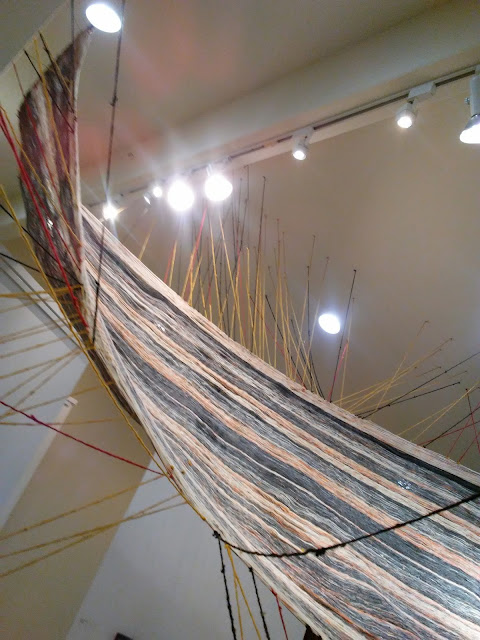 Posted by Patricia at 1:31 AM 2 comments

BC to BC: A Survey of Contemporary Ceramics from Baja California to British Columbia

BC to BC: A Survey of Contemporary Ceramics from Baja California to British Columbia. is now at the San Diego Art Institute, is curated by N. American Souvenirs. I liked their website message, "We do the boring work so you don’t have to, and try to limit your experiences to what we hope you’ll enjoy as fun, recreational opportunities.
I have made a personal choice of just some of the works in the show. It is displayed really well and there is so much to check out so try to get there before it closes on Oct 20th. This exhibition has something for everyone and although the works have great content, they are also well crafted. This is the sort of balance it is nice to see at SDAI. Plus with the coffee shop and the smashing of cups and the live workshop, this space is enlivened. Top that off with some great art and it is a winner.


Here is the statement by the curators of this exhibition: "Artists from the Paipai Native American Tribe in Santa Catarina, Baja California maintain the longest continuously operating pottery tradition from Baja California to British Columbia. A more than 1000 year old technique to mine, process, and sculpt clay has been passed down through the generations. Throughout the centuries, Paipai artists have innovated their functional pottery to meet the demands of neighboring tribes, colonists, and present day tourists.
This spirit of innovation has been imbibed by countless artists working with clay up and down the coast and came to a head at the middle part of the last century. The large variety and high quality of exciting artwork produced today can be squarely attributed to sculptor, Peter Voulkos (1924-2002). The voluminous and abstract clay sculptures he made in the 1950’s blurred the line between fine art and craft, inspiring his peers and generations to come that anything is possible with clay.
One of the first waves of artists to be inspired during this same time period by clay’s newfound potential and reinvent ceramics to their own pursuits was the wildly diverse school of Funk artists, of whom, Robert Arneson (1930-1992) was a central figure. Unlike the popular abstract and geometric work being made at the same time, Funk Art was often representational, humorous, and more approachable to the general public.
To innovate however, didn’t mean that artists needed to stray too far from traditional ceramics during this period of reinvention. An entirely different group of unrelated artists on the coast, who also got their start in the mid-20th century, were unfazed by clay’s designation as craft and continued making exquisite work regardless of its classification. This included the likes of Barbara Willis (1917-2011), Doyle Lane (1925-2002), Ralph Bacerra (1938-2008), Wayne Ngan (1937-), Dora de Larios (1933-), Salvador Magaña (1931-2016), and Edith Heath (1911-2005). Due to their refined ornamentation and exploration of new and historical forms, their talents helped further blur the line between fine art and craft with design.
The 34 artists you’ll see today span multiple generations and display a wide variety of ways to work with clay. Some follow in the footsteps of the artists we’ve discussed while others have sparked completely new conversations about the role of ceramics today."
- N. American Souvenirs
Posted by Patricia at 1:07 AM 0 comments

The time is right and we are seeing more and more exhibitions of fine art that focus on the challenges of the environment. Bringing the arts to bear on a wide variety of issues that affect local, state, national and even world issues is one of the most important duties of the creative communities. Could one artist on their own change the direction of our society? Possibly not, but we should not underestimate the collective power of those who can shine a light on important matters. Additionally, the artist themselves can lead lives knowing they are doing their best in the face of disasters. Those who are exposed to exhibitions like these might themselves be a part of the solution, inspired to make decisions or take actions that will benefit us all. 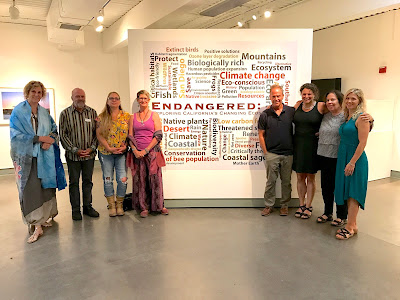 Posted by Patricia at 5:15 PM 0 comments