Gabrielle Bakker arrived from Seattle to work with only a month to complete a work of art measuring 36 by 40 inches as part of the artist residency program at Lux  Art Institute. She usually works extremely slowly, completing a painting only after many many revisions. She is painstaking in her attention to a realistic style which combines many genres of art. So she had to do many many studies to resolve issues of composition, color and light so that  this work could be resolved in the time frame. once she arrived.  If you visit Lux you will see all the working drawing that she brought with her as well as the progress on this new work

Bakker has used oil paint sometimes mixed it with egg tempera and has taught herself about gold leafing and framing. She recently has begun to cloth her figures in contemporary outfits but the art still has an old master feel. Her works is rich with symbolism and allusions to mythology and history.

Gabrielle Bakker is in studio until May 5 and her work on view until June 2. 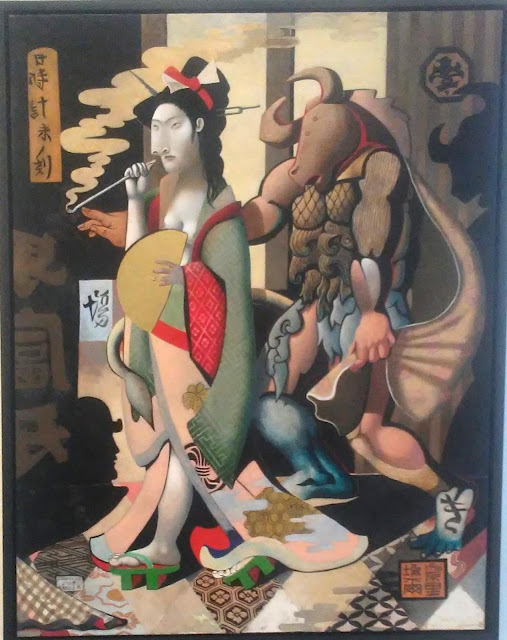 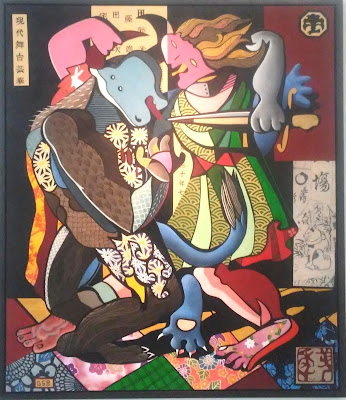 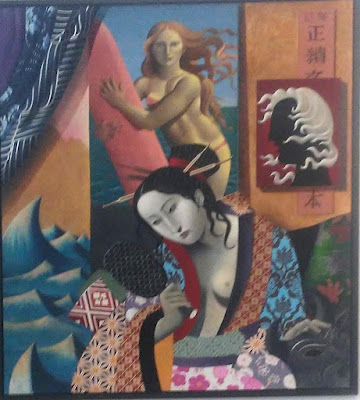 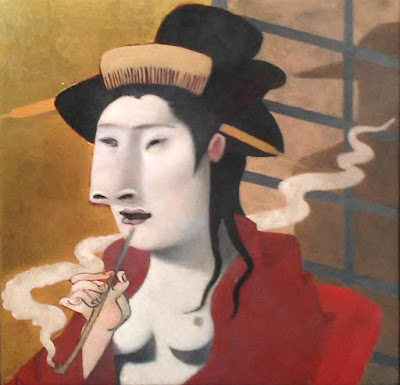 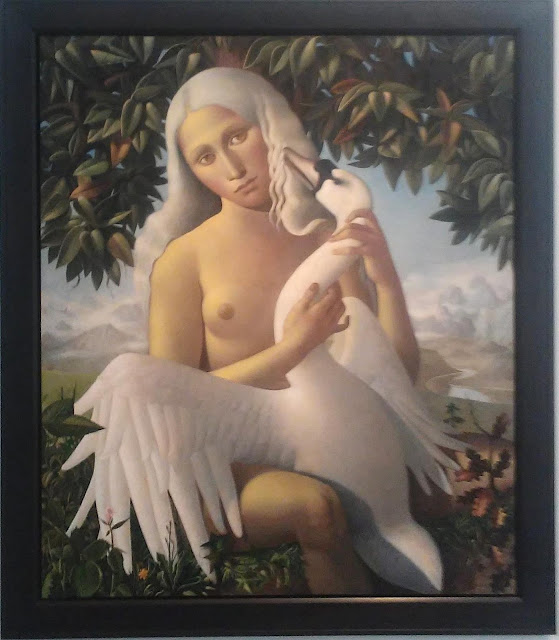 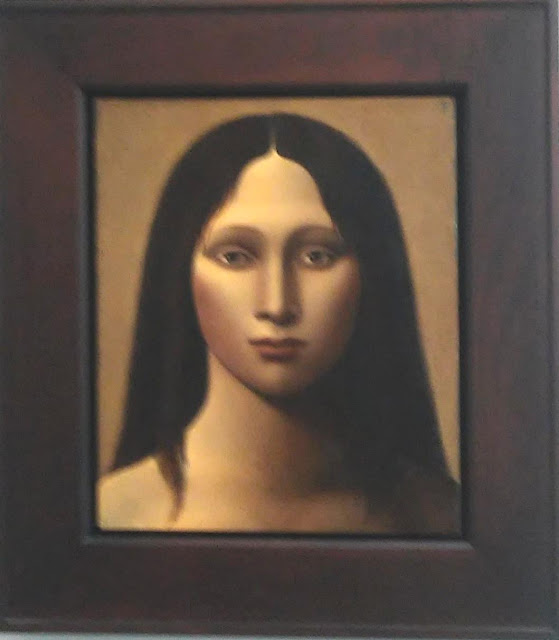 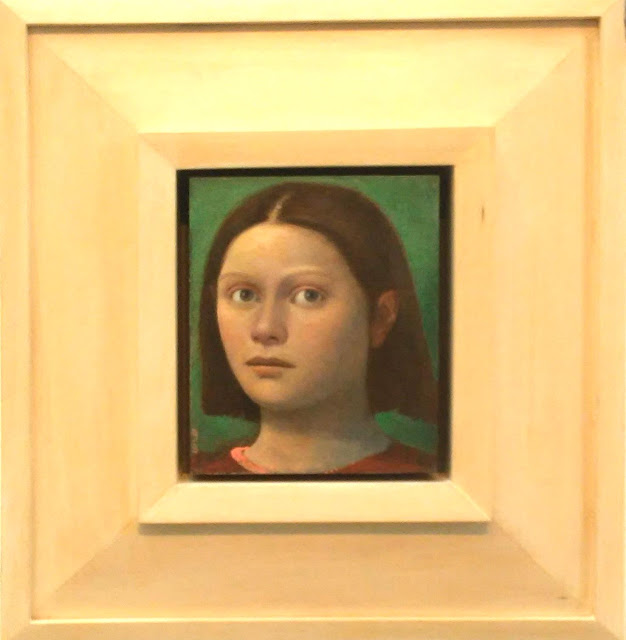 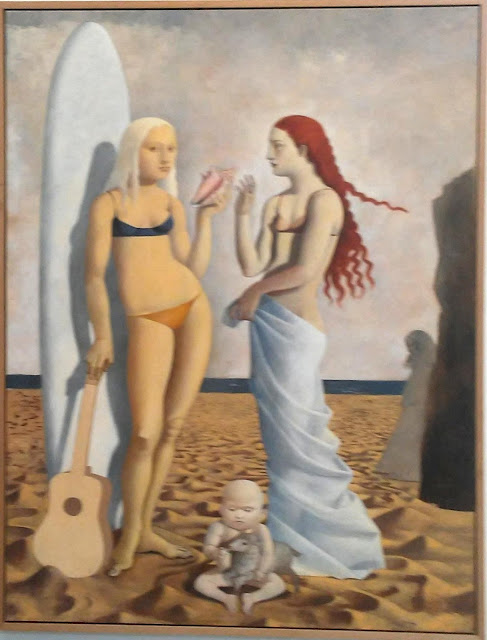 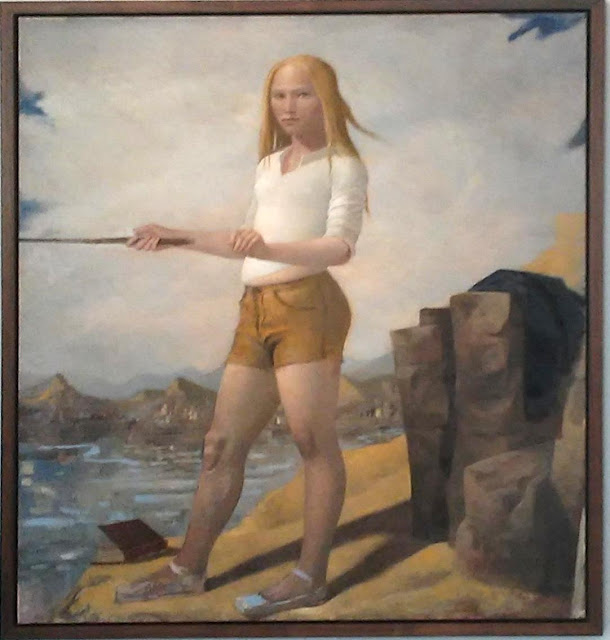 David Adey and showing a few new and a few older works in the lobby of the Education Pavillion. This obsessively crafted work makes for compulsive viewing..

Posted by Patricia at 3:32 PM 0 comments

Station Eleven, The Big Read at Oceanside Museum of Art

Both Artifacts, Survival Is Insufficient  and the Museum of Civilization are exhibitions inspired by Station Eleven, the book chosen for the annual city wide Big Read. "The novel is set 20 years after a devastating flu pandemic destroys civilization as we know it. A woman moves between the settlements of the altered world with a small troupe of actors and musicians until they encounter a violent prophet who threatens the tiny band's existence."*

For these exhibitions, Station Eleven revolves around the “artifacts” of a recently collapsed early 21st-century Western society. .An essential concept of Station Eleven is that survival requires more than basic needs, that there is value in art and creative expression that makes it intrinsic to life. 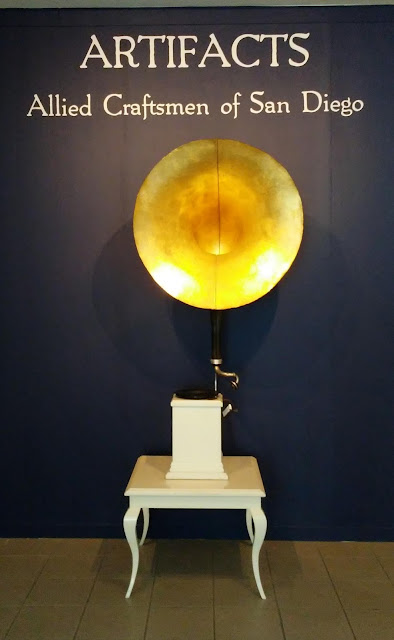 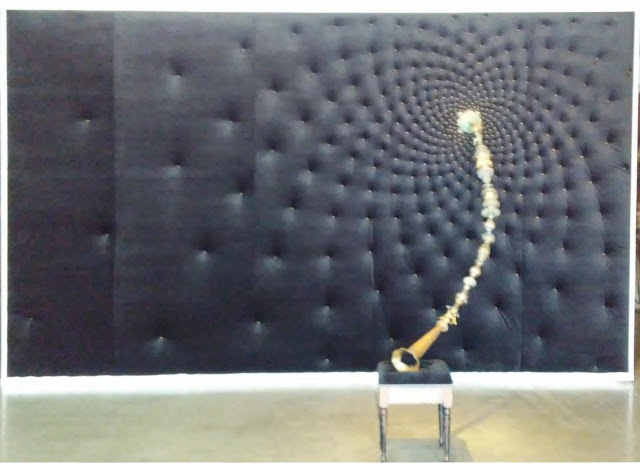 On May12 from 6 to 8th there is a further opening of four more exhibitions exploring literature, language and storytelling through the visual arts. All these shows run until Sept 2.

*Arthur Leander, a famous actor, dies on stage in the middle of a performance of King Lear. Jeevan, a man training to become an EMT, rushes the stage to try and save Arthur, but it’s too late. He ends up comforting Kirsten, a young girl, who witnesses Arthur’s death. Later that night, Jeevan walks home in the snow. His friend, an ER doctor, calls and tells Jeevan that a plane has arrived from Russia full of sick passengers who are dying. This is the beginning of the Georgia Flu pandemic, which will kill ninety-nine percent of the population.


Fifteen years later, civilization as readers know it no longer exists. There is no electricity, air travel, cars, or stores. All governments and economies have collapsed. Settlements are starting to emerge, as well as doomsday cults.
Fifteen years after the collapse of civilization, Kirsten is now a young woman and is part of a Traveling Symphony. The Symphony goes to different settlements to perform Shakespeare’s plays and classical music, but the world is full of danger. Charlie and Jeremy, two of Kirsten’s friends, left the Symphony while Charlie was pregnant to stay in one place until the baby is born. When the Symphony returns to get them after two years, Charlie, Jeremy, and the baby are missing after the settlement was overrun by a doomsday prophet.
The Symphony goes in search of their friends and is led to a rumored location called The Museum of Civilization, an airport settlement somewhere near Sovern City. As the group travels, flashbacks provide clues to who Arthur, Clark, Kirsten, Miranda, Jeevan and others were before the collapse of civilization. Arthur became a famous actor who married three times. Clark left his punk-rock days behind and got a PhD and became a successful businessman. Kirsten was a child actress who befriended Arthur before his death. Miranda left an abusive boyfriend for life in Hollywood until she realized that her husband was cheating on her. Jeevan used to be a paparazzo and entertainment journalist, but was looking for something more meaningful in his life and was training to become an EMT.
After the Symphony leaves one of the settlements, they find a stowaway in their midst. It’s a young girl who is promised to be the fourth wife of the prophet. Sayid, Dieter, and Sydney, three members of the Symphony, all vanish. Kirsten and August, another Symphony member, get separated from the group. They encounter followers of the prophet. His men have abducted the other Symphony members and he wants to trade them for the stowaway. Dieter accidentally dies while in custody. The prophet is prepared to kill the others to get what he wants. A young boy who is traveling with the prophet ends up shooting him.


Kirsten, August, and Sayid are within walking distance of the airport settlement. They meet Clark and are reunited with Charlie, Jeremy, and their daughter Annabel. Clark shows Kirsten evidence of an electrical grid coming on in the distance, and they are all left with the hope that civilization is about to reemerge.
Posted by Patricia at 12:44 PM 0 comments

This was a chance to network with both performing and visual arts resources, get updates about NCAN activities and learn about how to spread the word about events and projects.

Great thanks to Carolyn Grant and her team at the Museum of Making Music for this very special hosting with delicious food from Tip Top Meats, wine, water and delicious chocolate goodies.  Their staff was exceptional in every way as they supplied AV support from BJ Morgan, also marketing manager and a wonderful guitarist Bill Kilpatrick also the educational manager.

Patricia Frischer gave updates on NCAN and encouraged everyone to check their directory listing and update if needed.  PLUS please list their events remembering to add images.  She announced that the next networking event would be in the summer and NCAN is looking for a volunteer organization to host. This is a great chance to get your facility noticed and appreciated.

NCAN is planning a large north county wide promotion for the month of October called Open Your Heart to North County Arts. So think about your October events now. We will launch at ArtWalk Carlsbad on Sept 23/24. The ArtWalk team are giving us room on their stage for snippets of performances. Contact us if you want to be involved. We are also happy to announce that The Forum Carlsbad is a sponsor for this promotion and will be doing a fundraiser for us during their Art, Rhythm and Wine event in mid-Oct. We want to thank both Art Walk and Forum Carlsbad as well as Studio Ace who is the fiscal agent for Open Your Heart to North County Arts and other donations and grant for the next 12 months.

Naomi Nussbaum introduced our presenters for the evening: 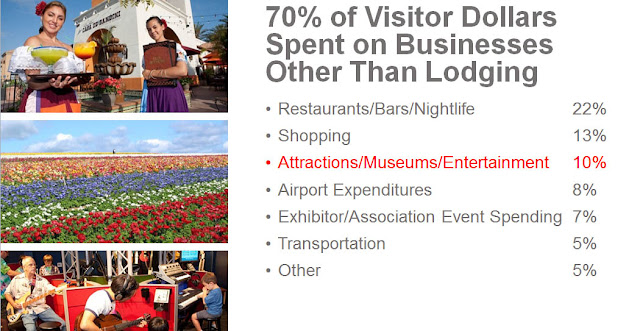 First to present from SDTA was Robert Arends, Public Relations Manager and Jenn Davies Director of Cultural Tourism for the San Diego Tourism Authority, They shared how to list your events for free on the www.sandiego.org website to increase audience. This is not obvious so follow these instructions carefully. Go to the very bottom of the home page and click on Contact SDTA, then scroll down on the next page to click SUBMIT AN EVENT to list your event. You can also note this direct link to the form page.  https://www.sandiego.org/about/event-submission-form.aspx. Any event submissions with images not properly cropped will result in immediate rejection. Submitting your event does not guarantee that it will be posted on SanDiego.org's Events Calendar. Becoming a member of the San Diego Tourism Authority does qualify your event to appear on the website. However, Mr. Arends says that not being a member does not disqualify you. BUT Event listings about conferences, business seminars and fundraisers (including galas and golf tournaments) are typically NOT PUBLISHED to the calendar. 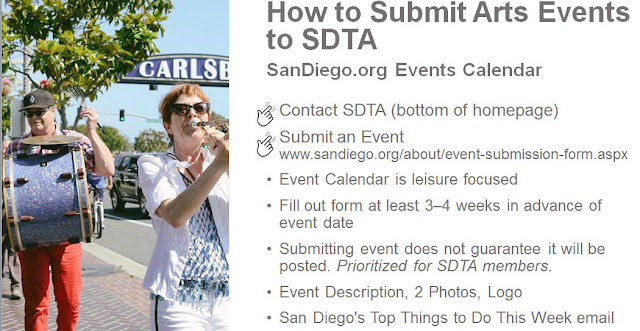 You also need to send press releases to PR@sandiego.org. And these need to be geared to get their attention by mentioning little known gems, or major events.

They also explained the many ways they promote their members ($550 annual fee). On their site there are the top things to do for any one week, guides to the good stuff, a special report on arts districts in the North East. 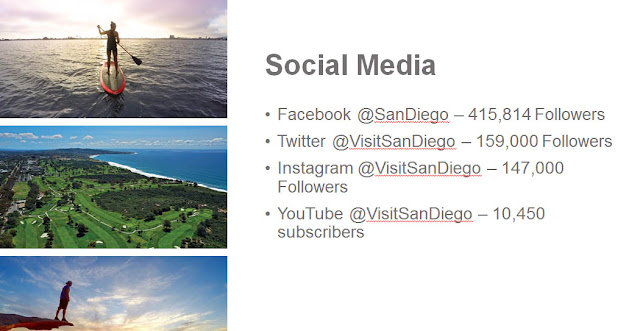 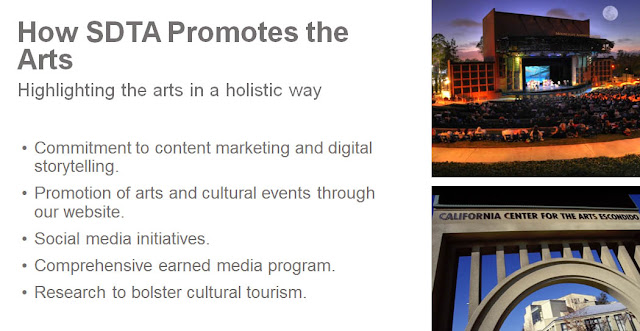 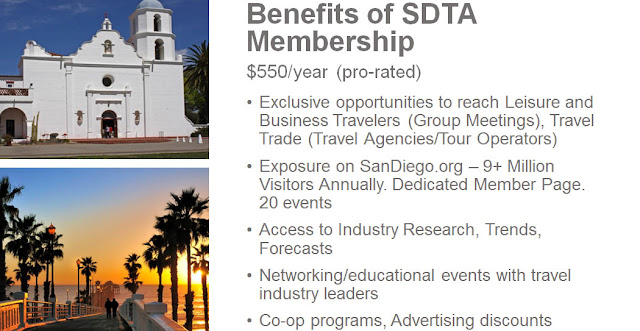 We could find nothing on the north coastal arts and culture although they list 9 other art districts in the city of San Diego including North East. .Almost all of their funding comes from the city of SD.. They have the usual social media sites including instagrams and blogs.There are sections with videos on
North County Coastal

SDTA’s big annual meeting is on May 10 at SeaWorld (4-7 p.m.), if you would like to attend for free send us your email address and we will forward this so you get a formal invitation.

Unfortunately Ernest J. Dronenburg, Jr. the Assessor/Recorder/County Clerk was not able to attend but did send a printed handout about help on reporting tax benefits for arts organizations. His tips were 1. Call his office for help 619.531.5763 as every case is unique, 2. If you are an approved 501(c)3 you can receive welfare exemptions. 3. Get an organizational clearance certificate from the CA State Board of Equalization at http://www.boe.ca.gov/proptaxes/welfareclainforms.htm  4. Property owners and renters can receive property tax relief if those properties are used exclusively for non-profit activities. We have lots of questions about this so maybe Mr. Dronenburg will come to another meeting to clarify his tips.

Last but certainly not least, Corky Lang, President of the San Diego Professional Tour Guide Association discussed tours that highlight cultural destinations. His organization tries to familiarize themselves with everything available that might be of interest to a tourist. A DMC or Destination Management Company is the facilitator for corporate clients that want to offer this service. It might be a tour for the non-participant of a convention.   DMCs are members of SDPTGA which offers certification for tour guide who are also members. They have about 100 members who pay from $50 to $100 a year. Mr. Lang’s recommendation were to concentrate on local hotel as his experiences tells him people do not want to go too far afield for their entertainment. .Check out their Facebook page for access to their newsletter. He owns his own tour and travel company and can be contacted at corky.lang@gmail.com 619.254.2188. He looks for organizations and talent that have ongoing activities that can be booked as a one hour part of a half day tour. Lang was very entertaining and we all appreciated his historical story from the 1930 about how you could get out of a traffic ticket by attending two cultural events…those were the days!

Everyone attending was put in a draw for a pair of free tickets to Encinitas’ SD Botanic Gardens and the sculpture installation which Naomi Nussbaum curates or two sets of free passes to Carlsbad’s New Village Arts for performances of Men on Boats on until April 22 or Avenue Q from May 18 to July 1.