I was very impressed by the curator’s statement for the volcanoes and Full Moons exhibition, a mini retrospective of the work of Ernest Silva. Daniella Susalla worked hard and successfully to put together this and the other three major shows at the OMA. All these artists are top quality and two of them Silva and Jay Johnson, both SD Art Prize established artists, are local to San Diego. It is nice to see our own on equal footing with Charles Arnoldi and Tony Dulap.

I am a huge fan of Ernest Silva’s art and he is an immensely likable and intelligent man who is as charming as his work.  In this show, I recognized his continuous use of a recognizable set of images that is his visual language.  I was most surprised to be unable to date any of the works.  Within a theme (and the work was hung in themes) the dates ranged over 40 years. His consistency in no way means there are limitation in the variety of the work.  Instead,  I feel that the work has a freshness that makes it impossible to recognize a chronological order.  I always feel as if I am looking at pages from a graphic novel when I see Silva’s work. You know there is a story there but it is up to you to make it up in your head. Nostalgia and Nature live side by side with Scary and Silly. 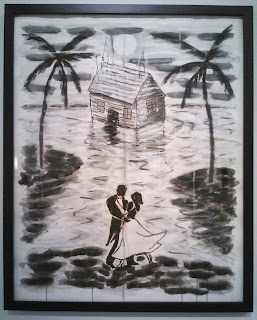 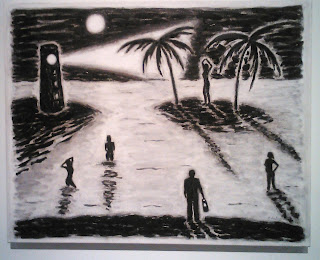 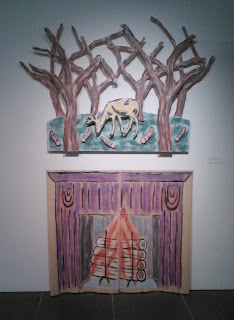 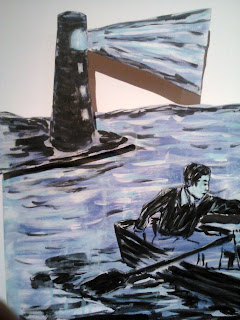 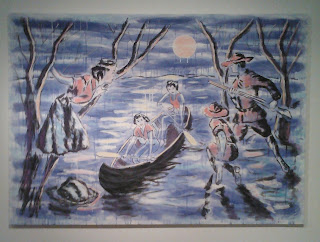 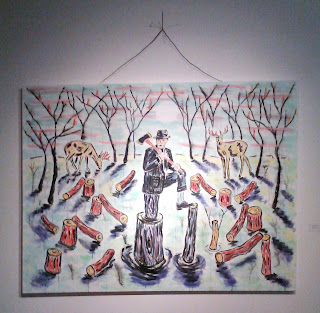 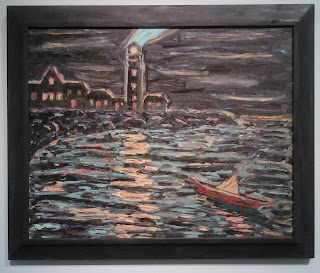 I also admire Jay Johnson greatly and especially the way he has combined his graphic design and display sensibilities which are top notch with his fine art vision. But I am the most taken with his small metal and turned wood figures. The small boat from this small show was the winner for me although the large work which we first showed two years ago at the Art San Diego Fair is a museum quality acquisition waiting to be made. 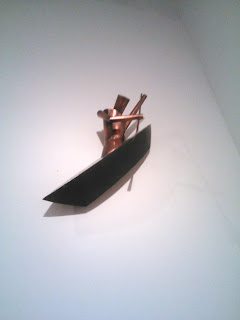 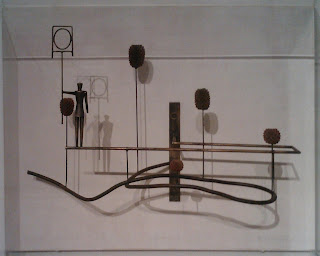 I know the twig themed works of Charles Arnoldi but it took me a while to transition to the flat paintings. That is why the hacked painting for me was the star of this show. It looked like he had painted on a thick wood slab and then sawed it like someone who had never used a chain saw before…rough and in your face and bold. I like that raw power. 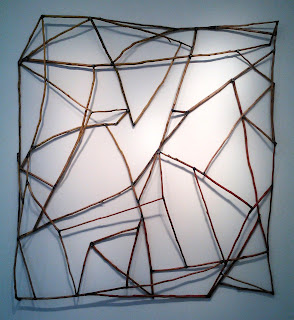 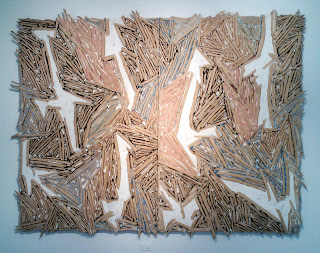 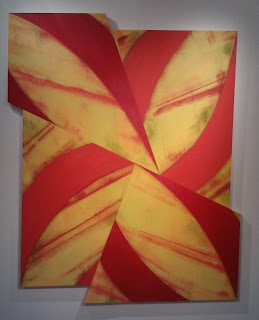 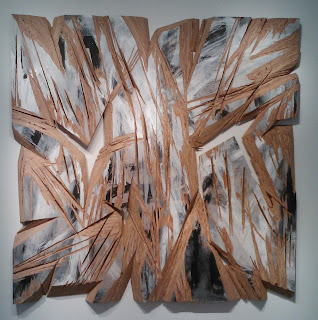 So now it is up to you to go and see this great collection of show and tell me what you think of Tony Dulap art on display.

Looking for Things: Jay Johnson at Oceanside Museum of Art


Jay Johnson’s exhibition in the Parker Gallery is an elegant collection of wall works reminiscent of both assemblage and minimalist sculpture.  The works call to mind the sculpture of early 20th century sculptor Brancusi in their highly well crafted wood forms and the minimalist works of American sculptor Donald Judd. Johnson’s work is both quirky and playful, as well as poignant and symbolic. His metal sculpture “Flag Path”(2009),  mixes small oval shapes with pine cone-like texture, gestural line, a statue-like figure holding up a sign with an oval metal shape within it. This wall piece comprises a balanced set of shapes whose compositional formality outweighs any narrative meaning. Symbolic formalism is a hallmark of Johnson’s work. Another larger piece “I Keep Looking for Things”(2010)is a black and white wall piece made of ceramic tiles with photographs , and some painterly forms on tile creating a vertical assemblage of square and rectangular tiles joined together.The photographs suggest biographical material.The composition follows a visual pattern that is more mechanical rather than personal in its content. Johnson’s love of shape, form and craftsmanship along with an intriguing combination of materials, forms the foundation of the work in this exhibition.

“Volcanoes and Full Moons” is a large survey of Ernest Silva’s work that spans four decades.  Paintings,installation, sculpture, and drawings create a landscape rich in visual poetry and story telling that is uniquely Silva’s own.  Sometimes illustrative and often with a loose painterly style Silva’s work evokes early twentieth century art history and an appropriation o the work of Matisse and Gauguin,together with a mix of German Expressionism and folk art. Many of the subjects of these works explore personal imagery of deer, lighthouses, bodies of water, birds, tree forests, volcanoes and burning fires – all recognizable as Silva’s vocabulary honed over many years. Silva’s mostly large scale works include a series of black and white expressive paintings depicting nude figures in idyllic landscapes. They are simultaneously romantic and thought-provoking, and appear to speak to a deeper universal search for meaning. Other richly hued paintings of interiors and outdoor landscapes are narratives that require the viewer to decipher or create on their own.Creation, destruction, bringing awareness to the fragility of the environment  and natural world and the duality of darkness and light are all themes that are explored in Silva’s work.