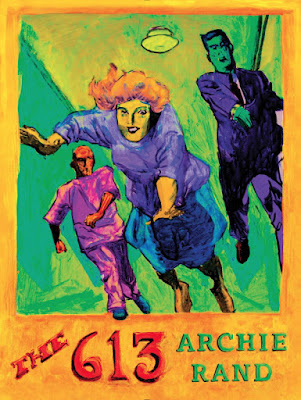 If you, or the kid in you, is a fan of “comix,” you’ll be a fan of The 613, a collection in which painter Archie Rand illustrates each of the Torah’s 613 commandments. All done in a wild style the New York Times calls a “mash-up of comic books, True Detective magazine covers and obsessive-compulsive disorder… like Marc Chagall on a bender,” each panel in The 613 is stunning, truly unique work of art. Meet the artist for a Bagels & Books event on Wedn. Nov 2 from 10 to 11:30 and a virtual and very visual guided tour of one of the most singular works of Jewish art ever made. Center for Jewish Culture, TEMPLE SOLEL 3575 Manchester Avenue, Cardiff by the Sea, CAS 92007. More info: Leigh Haubach  858-362-1148.

When a book illustrator starts a lecture talking about Clement Greenburg, one of the most prominent art critics of modern art, your ears perks. It turns out that Archie Rand is the creator of the pictures for the book  The 613. The 613 took five years to complete and is indeed an illustration of the 613 mitzvahs that are like the Jewish commandments.  But Archie Rand’s journey is not just one of an illustrator.

Rand is a very entertaining speaker. He combines art philosophy with stories of his life in New York in the early 70s in beer joints like Max's Kansas City.  This was before the MFA was invented in our art schools and artists were a wild bunch of anti establishment figures. Rand was a young Jewish abstract painter trying to find his way in the world of art galleries, looking to join the ranks of the famous. Many artist were Jewish, but none used Jewish motifs in their work.

Rand’s view was that Jews were trying hard to assimilate and art was a way to fit into American culture. Universalism was a popular concept where religion was considered a human quality. Judaism was a religion, but Jewishness is a culture. So you could stay Jewish and be an artist as long as you did not make religious art.  But when Rand was commissioned to make art for synagogues, he had to be careful to be obedient to the rabbinical precepts.

The main communication of Jews is text not visual. Services are about conversation, even argument. So Rand started looking at the nouns that would give him clues to how to paint objects acceptable as art in synagogues. He had to work figuratively and as his work was religious, he was cast out by his former artists drinking buddies. Actually, as an aside, it turns out that Mary Boone moved her stable of artists out of the cheap joints and into more expensive restaurants, so instead of a $1 beer, that crowd had to pony up for $100 lunches. The whole scene was changing, and Rand found that he identified more with the graphic novel (comic book) artist of the time. We found out at this lecture that the artists from Mad Magazine were actually mostly Jewish.

Rand was able to tread the delicate line with the synagogues and has built a relation with them all over the world. He developed a theory that if the visual was the primary means of communication and the text was secondary, the combination would be winning. But first he was challenged by rabbis and congregations who objected his use of animals and black backgrounds. He also has continued to make non-secular work. Some of his work looks like it was influenced by R, B Kitag, an artist who Rand knew, but I see all sorts of other influences as well, like Raoul Dufy.

The book The 613 is reproductions of all the pictures in this one series. When displayed it fills a space 18 by 100 feet. It has been shown once in a warehouse in Brooklyn for 4 hours and had 1000 visitors, but it will be shown next year in San Francisco at the Jewish Museum. Rand is a prolific artist who has spent his life working in a field he has pioneered. With this book on the New York Times top selling list for 30 weeks, he might finally have broken through to a larger audience. 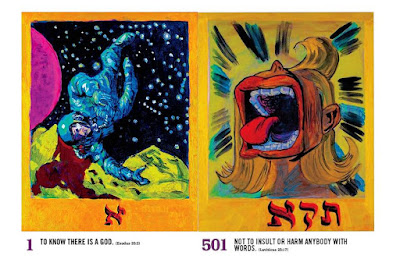 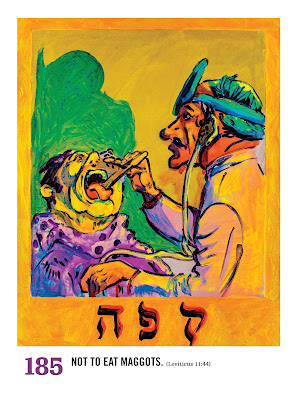 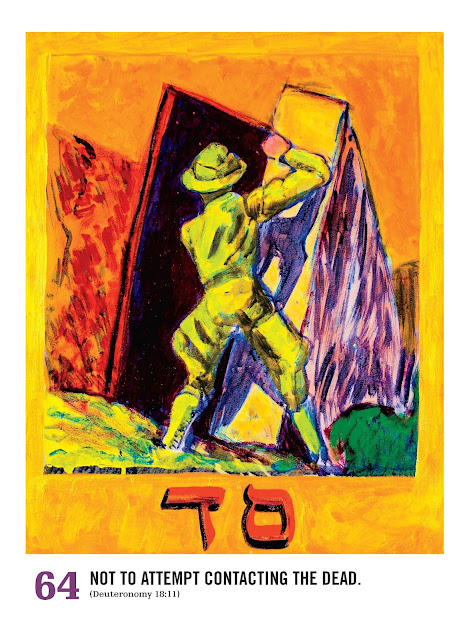 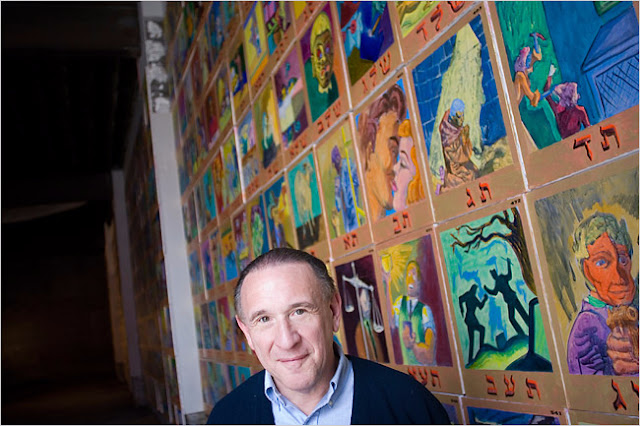 BIO: Archie Rand is an artist from Brooklyn, New York, born in 1949.  Rand's work as a painter and muralist is displayed around the world, at the San Francisco Museum of Modern Art, the Art Institute of Chicago, the Victoria and Albert Museum in London, the Bibliothèque Nationale de France in Paris, and the Tel Aviv Museum of Art. There have been over 100 solo exhibitions of his work. He has also published collaborative work with poets Robert Creeley, John Ashbery, Clark Coolidge, David Plante John Yau, David Lehman and Jim Cummins. He was awarded, among numerous honors, the Achievement Medal For Contributions to the Visual Arts by the National Foundation for Jewish Culture and he received the Guggenheim Foundation Fellowship. Formerly the Chair of the Department of Visual Arts at Columbia University, he is currently the Presidential Professor of Art at Brooklyn College, CUNY. His home and studio are located in Brooklyn.
Posted by Patricia at 9:25 PM