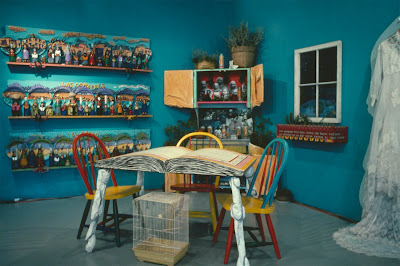 Making Communities: Art and the Border brings together a diverse selection of artists with one commonality: the drive to create work focusing on the multi-dimensional cultural, social, political and economic issues of the San Diego/Tijuana border region. As a visitor to the show, I found my attention drawn and riveted to a video slide show of black and white portraits of women that were part of a group called Las Comadres.  These photos plus the other works exhibited by this group, compelled me to learn more. Artist and group member Cindy Zimmerman offered to help me on my quest by connecting me with members’ email responses to questions I posed to the group.  A valuable ‘closed’ online conversation ensued among group members highlighting the depth and legacy of this fascinating collective of women artists, scholars and activists.

Artist/Las Comadres group member Frances Charteris who created those potent portraits comments “I elected to do individual portraits rather than group images because I felt it was the only way I could honor the depth, richness and beauty of the women engaged in our collective…When we discussed readings, art or politics I sensed and witnessed the intensity of the reactions; the cross cultural tensions and the way we’d stumble on the inexpressible or incommunicable…”

This transnational group functioned as Las Comadres from 1988-1992.  It began as a reading/study group by founders Emily Hicks, Rocío Weiss and Berta Jottar who had collaborated previously while in a former group, the Border Art Workshop/Taller de Arte Fronterizo. In a discussion with Ruth Wallen and Anna O’Cain, the emergent group’s form was further outlined. Hicks comments: “I wanted to be in a feminist group that was open to experimentation and focused on border/immigration issues. The diversity in Las Comadres was inspiring and as more women joined the group, I realized it would be possible to expand to showing our work…. I wanted Las Comadres to be an anti-racist, inclusive feminist art collective”. Member Ruth Wallen added “the forming of the group was “sparked by conversations at the opening of artist Hung Liu’s work at Southwestern College, having to do with Chinese footbinding”. She also noted “Las Comadres included students, both grads and undergrads, including some studying at Southwestern, and faculty, all learning together…then other women
joined”.

Many of the Las Comadres were UC San Diego alumna, but some were not – some became affiliated from their involvement in Centro Cultural de la Raza.  Graciela Ovejero Postigo comments: (we’re)”from a long list of names coming from very different fields of cultural, ethnic, work/disciplinary experiences and personal memories….self declared feminists…there was a sense of trust shared that we all understood somehow and consequently, could ably function on more organic non-hierarchial ways. I remember great enthusiasm…there was a general sense that anyone could invite somebody else to participate in the group.”

There were varied reasons as to why members were drawn to Las Comadres. Eloise De Leon comments “I worked in the field of women’s health and The Centro Cultural de la Raza served as my training ground for understanding art that was political and the politics of art, and my experience with Las Comadres helped pave the way for my entrance to UCSD’s MFA program.” Postigo comments “membership became a catalyst - as a feminist woman artist immigrant from Latin America, attempting to make sense of myself everyday, in a foreign culture. Also, the interest of working as geopolitically situated women artists critically dialoguing and intervening on the immediate realities of the border region and contesting the persistently relegated and denied
recognition to the work of women artists within the art system.”  Zimmerman comments “ Las Comadres brought a dimension of honoring womens’ perceptions and connections to the issues and to daily life, with a sensual and ritual aspect I had been longing for; an invitation and permission to explore and expand in political, metaphysical and social aspects.”

Most members agree that a few formal institutions in the community that supported the ideas of the group and their work were: Centro Cultural de la Raza, UCSD and the Museum of Contemporary Art, San Diego.  Zimmerman comments: these and the Bridge Center for Contemporary Art in El Paso hosted our shows.” Postigo also comments: “the Centro and its community became the true supportive institution for our projects and concerns.” In 1992, a binational exhibition took place, co-organized by San Diego's Museum of Contemporary Art and the Centro Cultural de la Raza with work from Las Comadres. The title of that exhibition was La Frontera/The Border: Art About the Mexico/United States Border Experience.

Las Comadres were involved in performance art exhibitions but also inserted their strong sympathies in social and political activism. One example had to do with a response to a San Diego conservative populist campaign led by former mayor and talk show host, Roger Hedgecock in Fall, 1989 called “Light Up the Border”, a protest against ‘illegal aliens’ . He encouraged a series of protests for San Diegans to line up their cars on the border and aim their headlights to aid Border Patrols in apprehending the undocumented trying to cross the border. In response, Las Comadres positioned themselves opposite headlights of over 1000 cars by holding up mirrors and mylar reflectors, returning the lights back on them. In addition, they hired a plane to fly over the area occupied by protestors, with a banner reading “1000 Points of Fear – Another Berlin Wall?” Some group members also distributed “Border Handbooks” explaining the history of the area and attempting a dialogue with the press and demonstrators. Wallen comments “I feel that our participation, offering historical facts, and an alternative point of view was very important. We were also interviewed at length in subsequent demonstrations. Aida Mancillas represented us in a half hour interview with NPR. Many of us kept attending the subsequent demonstrations. I kept documenting the protests and saw my role as silent witness…”  Kit Aaboe in commenting on Las Comadres contributions on the border issue says “Many more activists have been born and feel empowered, and are standing up for not ony their rights, but are acting as advocates for those at risk. This is the core concept of Las Comadres: understanding each other’s points of views and values and acting out of sincere respect and concern for our neighbors.”

A major collaboration of the Las Comadres was an exhibition in 1990 at the Centro Cultural de la Raza called La Vecindad/The Neighborhood ,a multi-media, multidisciplinary exhibition. The installation featured three principle spaces representing different frameworks. A bright, multicolored kitchen contrasted with a completely black and white "conflict room." A third space, actually two small rooms, included a border feminist library and video viewing room. A performance, Border Boda, (Wedding) which was staged in the installation, centered around the differences between written and oral, as well as "First World" and "Third World" histories. Wallen comments “We explored what it meant to create border culture, a culture that instead of highlighting the alien and destitute celebrated the entire neighborhood.” De Leon comments: “ Our performance of Border Boda explored crossing borders and losing one’s language. That was a running theme in my life at that time. I’m currently serving in the Peace Corps and my goal is to finally learn Spanish. I like to imagine that I can finally speak to my grandparents who spoke only Spanish.” In her article Border Boda or Divorce Fronterizo?, Las Comadres member Marguerite Waller states “ Border Boda is not representational theater but a ritual performance processed out of our collective(if heterogeneous) memories, to give our audiences and ourselves the strength and spirit to come to terms with our painful histories and conflicted relationships to each other.”

Since 1992, the Las Comadres collective has not actively engaged in collaborations and now in 2017, have some reflective thoughts about themselves and the group:

“ We hoped to become closer to each other through telling our stories and weaving them into performance.” Marguerite Waller

“ The experience was memorable for me because I found it to be a healing space – a parenthesis: for the first time in my life I could speak openly on multiple levels – things I had never been able to say to anyone; ideas and thoughts I didn’t know had burst forth because of working with other women. .. It was transformational, life-changing, painful and joyful simultaneously. I ceased to care about patriarchy or even mention it because I discovered another way of being and living; other ways of creating and another space in which to create, one that was safe, experimental, playful, collaborative, female and often loving. These friendships were/are deep – hence the quality of communication today. …At that time, our collective allowed for privacy and intimacy. No one was expected to open up like some chose to. Nothing was forced or exacted on a personal level. Noone had to be transparent. We worked and played hard together in the best way we could.” Frances Charteris

And, in looking toward the future, the conversation among the members asked: Are you OK with Las Comadres continuing as a group? And do you want to be part of the group(and to what degree)?

“My answer is yes and yes. I think it is a powerful step to reassemble and move forward as a group. This time in history calls us back into action! For me, this time also calls me to reassert my feminist identity and reassess my feminist approach to art and activism.” Kit Anaboe

“I am very happy that Las Comadres is in the process of discussing whether or not we wish to continue as a group…I vote yes and yes….. I am very grateful that years ago, thanks to members of Las Comadres, I was able as a mother of a young child to participate in an inspiring community of women artists. I hope in future projects, to look at the diversity in our border feminist group and to discern some patterns. …” Emily Hicks

Las Comadres is a strong group of women who continued to succeed in their academic, artistic and life pursuits after 1992 in meaningful ways impacting their respective communities. Their re-connections these many years later with this online conversation, appears to have rekindled the spirit of the group. It will be exciting to see how Las Comadres evolves!

*Some of the Las Comadres group continues to be on view at the exhibition at UCSD Art Gallery continuing through April 13th.