Bram Dijykstra, Ph.D. gave a stimulating lecture at the San Diego Museum of Art this past Friday and the thesis of his talk was the nude in Western culture.  He has recently published a gorgeously illustrated book called "Naked" which is about the nude in America's art history.  Dr. Dijykstra is a cultural historian and his talk focused on American and European art, which allowed for a broader historical perspective than his book.  Dr. Dijykstra stressed that as a cultural historian, he is most interested in how art fits in with its particular time.
One of the beginning images he spoke about was one from a Dutch painter of the 1600's.  It depicted a husband and wife in realist detail.  Dr. Dijykstra pointed out how the two are set as equals in the composition.  The two are portrayed as smiling, healthy and well-to-do financially.  They appear as true partners to each other.
By the end of the 1800's, the real and the ideal began to clash philosophically.  Artists often considered realist works as vulgar.  He quoted a critic of the time as stating that nudes should be depicted as ideals because otherwise they are shocking to modesty.  Dr. Dijykstra argued that this philosophy was related to the gender and sexual politics of the time.  Women were no longer considered equal partners to men.  By the 1700's painters emphasized the sensual.  An image of Donatello's "David" from the mid-1400's was shown as an example of how in the past, men could be shown as sensual.
By the 1800's, though, men were depicted as solid, strong and above women.  Women are no longer shown as capable and dignified, they are viewed only as beautiful.  Men after 1800 are no longer represented as tender or sensitive.  Art shows the gradual evolution of society's view of women as they become objects for strong men to enjoy.  The earlier image of the Dutch couple as equals stands in direct contrast to the images of swooning women at the feet of men engaged in battle.
Dr. Dijykstra used images from fine art and from popular art, such as comic book illustrations or movie advertisements, because as a cultural historian he is not limited to fine art.  By the beginning of the 20th Century, popular culture images show women and becoming almost as muscular as their male counterparts.  Women go from being represented as objects of beauty to being shown as dangerous and capable of inspiring fear because they represent pure temptation.
Our contemporary images of women includes countless depictions of women as vampires.  For the past hundred years or so, there are those that think women suck the vital energy from men which is why they are so often shown as vampires.  When one considers that in our country, the right to vote for women is less than 100 years old, one wonders if the increase in the political power of women coincides with general unease about the role of women in society.
It must be noted that as women look more threatening and menacing in art, men become more one-dimensional.  Both sexes have lost the range of human emotion and capabilities in artists' representations in contemporary times.
Dr. Dijykstra began the talk by saying that the contemporary notion of "art for art's sake" has had the net effect of denying the value of meaning in art.  Art that is devoid of cultural or political meaning is celebrated.  The first abstract painting was painted by Kandinsky one hundred years ago this year.  Back then, it was revolutionary to create art without any specific meaning.  Now it is increasingly a matter of creating something that will sell because no one can object to the meaning.  Art without meaning is now the dominant art.  But Dr. Dijykstra points out, that even by denying meaning, meaning is inferred.  It is not possible to create art that does not by default have some meaning and it may also not be desirable to attempt to wipe clean the meaning from art.  Yet, what is shown and celebrated skirts the issue of meaning most successfully.  Dr. Dijykstra said he thought that currently there is an art mafia that rules what is good and bad.  I wish he had elaborated on who comprises the art mafia - but I would say it is the academic community, particularly here in San Diego.  Unless you are a faculty member at UCSD or SDSU, it is extremely difficult to show art in a respectable gallery here.
Dr. Dijykstra ended his talk by showing this image of a "Woman I" painted by Willem DeKooning.  He mentioned how this is such a celebrated painting - it is worth millions - and yet, the woman is a monster.  Rarely is the seething hatred and anger she displays spoken about in art historical texts.  Most often, this painting is admired for the handling of the paint, the complex layers of paint and the energy the painting exudes.  He questions what the high value of this painting implies about our society's image of women.  Do we want to celebrate women that are enraged?  Do we admire the expression of violence?  Is this kind of distortion really beautiful?  I have always loved DeKooning's works - but do agree - this painting is disturbing at best. 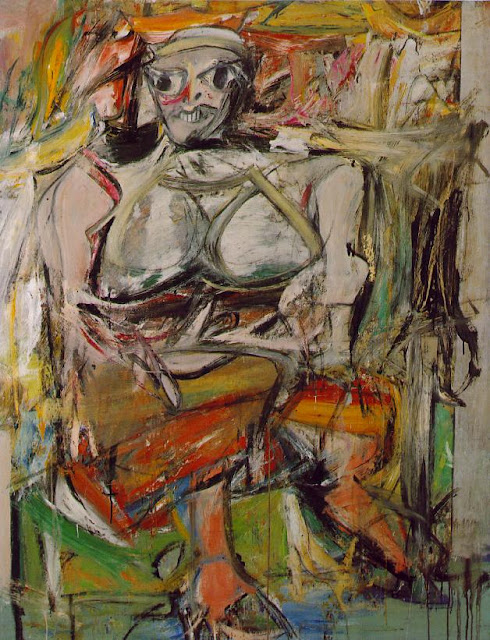 Dr. Dijykstra recommended that we not forget how volatile culture is and how easily swayed.  He also recommended that we fight for the analysis of content. That we declare art with meaning just as valid as art devoid of meaning.  That, alone, was worth making the effort to go to the talk.  I think the art of the future will include work that is brave in its content and will be a distillation of our time, rather than art that could as easily grace the lobby of a corporation as it does the wall of a gallery.  Art needs to rise to the Dr. Dijykstra's challenge.  The art must fight the established norms of intellectual vacuousness.
The depth and level of his scholarship is admirable and we are lucky to have him in our community.
Here is a link to his book:
http://www.amazon.com/Naked-Nude-America-Bram-Dijkstra/dp/0847833666
Posted by Kevin Freitas at 12:10 PM