by Joe Nalven
This commentary about art and technology focuses on the recent SIGGRAPH conference held in Anaheim, California (July 2013). In future articles, I will expand this discussion to art, culture, history and technology.

Ten years ago, the Art Gallery Director for the 2003 SIGGRAPH conference was Michael Wright. He came to San Diego and invited community participation. That was a novel idea for the traveling and mostly academic conference. The art that was selected in 2003 was nearly all 2D flat art hung on the conference center walls.
The San Diego City Council issued a proclamation about digital art. Perhaps the first of its kind.
WHEREAS, digital art visualizes the future of digital creativity beyond the postmodern mosaic of current reality; and WHEREAS, since its inception, digital art has become a part of, and seeks to energize, contemporary art;
That was a good year from my perspective.


SIGGRAPH 2013
This year, however, the art featured at SIGGRAPH was primarily interactive and  installation. This was the approach in 1993. So, the pendulum has swung back to interactive installation again after 2D flat art flourished in San Diego. 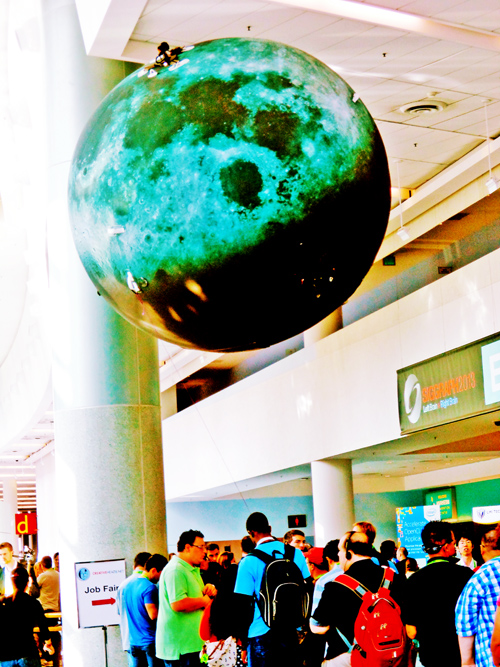 SIGGRAPH Lobby Area - Project Skye Blimp (Is it really a spy in the sky?)

The SIGGRAPH Conference Layout
The layout of the conference center floor in Anaheim had one big hall for the exhibitors - nearly a replica of what would be seen at the  San Diego Comic Con.


The facial scanning system captures your expression and places it on a 3D modeled face. This is me being scanned.

Outside the exhibition hall one could find other contrasts between these summer conferences:  Comic Con is the American Idol side of digital art and fantasy themes; SIGGRAPH is more on the academic side of computer generated art. That's a very rough contrast, but perhaps useful to keep in mind. Of course, the Electronic Theatre at SIGGRAPH is itself an amazing collection of great animations.

Comic Con's attendance is about 125,000 for the conference dates (the week before SIGGRAPH) and the Con gets sold out. SIGGRAPH's attendance is around 30,000 and room for many more to attend.  And there is more 2D flat art at Comic Con than there is at SIGGRAPH. Hmmmn. I don't know if that means anything, but makes one think about where the 'art' is or what the 'art' is.

Back to the SIGGRAPH floor layout. Following the layout provides a road map to how 'art' gets framed out in this venue.  The art gallery flows into the emerging technology and the studio areas.  It is one large open space area with unmarked boundaries.  Perhaps the greatest distinction is that the "art" in the art gallery has title  tags and is given more space to separate each installation.
Is this a "good" thing? Or is this simply "let's get you thinking  again about what 'art' is or what should be?" These examples are not meant to be definitive but rather to open the door to a discussion to art in a digital mode.

The Art Gallery
The theme for this year's art gallery is Left Brain/Right Brain. Of course, that contrast is a myth since the brain does NOT actually work that way.

One could add to the story line of the Exquisite Forest, produced by Tate Modern and Google Creative Lab by drawing in additional frames.  One could watch spirals of wood change shape as water steamed through its core (Mark Weston/University of Southern Florida).  One could visualize federal spending in 3D photorealistic images. Or one could watch a drawing machine spiral around as it drew on paper (Robert Twomey/University of Washington).

I was particulary taken by Cloud Pink (Yunsil Heo and Hyunwoo Bang / Seoul National University primarily because I could watch how visitors would come by and reach for the clouds. And I could take pictures of them with my magic camera.  ('Magic' because the camera has a painting application when one got tired of taking photorealistic images.)


Functional Art / Emerging Technology Functionality  was dissociated from art by art critics in the 19th century - it was seen as art for art's sake. Here, in SIGGRAPH's emerging technology area one discovers a broader sense of what art can do.


Take the device the can be used to help those with shoulder problems. The screen acts as a guide for those using the mechanical device.  (My brother has had cerebral palsy since birth and I was intrigued by the possibilities of integrating art and technology in behavioral health.)  This device is under development by the USCSchool of Cinematic Arts coordinated by Marientina  Gotsis.

The Studio
Just like graffiti artists using a spray paint can to spruce up (or deface?) buildings, The Light Wall interactive exhibit allowed the visitor to use an infrared light 'paint' device to paint a screen. The resulting image could be printed out.  The art (or graffiti) on the screen could be cleared for the next visitor. Of course, pop art, such as the graffiti wall, can become a party plaything.

The purpose of The Studio is to try out art making devices. There are no pretensions here beyond having fun. 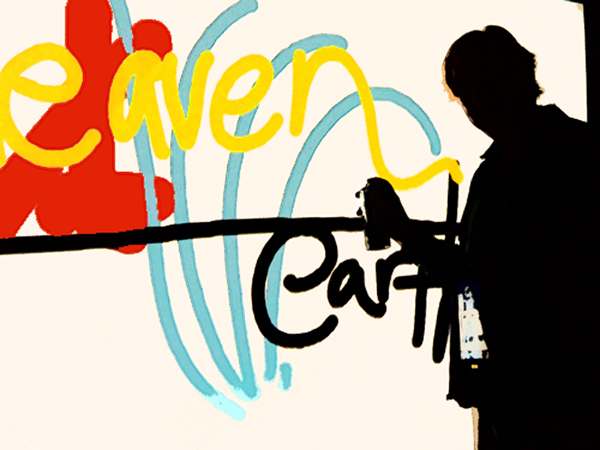 
The End of the Day in Anaheim
I began to wonder after my day at SIGGRAPH:  Imagine every gallery and museum of contemporary art having only installation and interactive pieces with no flat 2D art.
I got on the Metrolink and headed back to Oceanside.  I took some pictures with my magic camera. 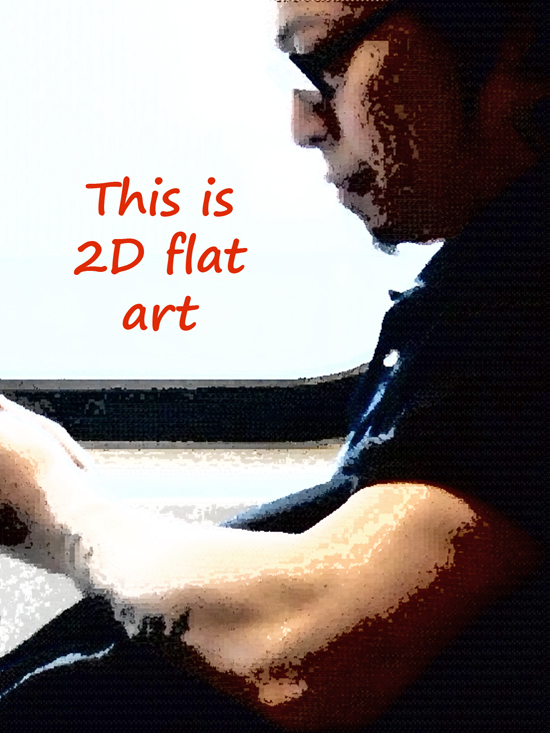