Manny Farber at Quint Contemporary Art  and Matthew Hebert and Jeanne Dunn at the Athenaeum are all shows listed on SDVAN in January and are very worth a visit to La Jolla and all are open to the public Jan 11 to Feb 15 .

Manny Farber at Quint Contemporary Art
Early color field painting by Manny Farber from 1967 to 1975 (Farber died in 2008 in Leucadia, CA) were an amazing revelation to me. I had a visceral reaction to these works. And although I am predesposed to like the works of Farber, these works are very different from the floral and table scape works I have seen at Quint in the past decade (they have held 18 solo shows for this fine artist.)  These very large  painting on paper were intensely lit in this show so that they truly glow with color and the texture is strongly revealed. I was challenged to think about why these works are so very impressive. I think the honesty of construction affected me like a Rothko work. In other words, I could believe in this works and never thought that they were meant to trick me with technique or illusion. Many of these work enabled me to freely associate meaning and content. They gave me a window into my own thoughts. The work before for example, looked like an airplane view of a city scape that morphed into a rhino hide. When you almost hallucinate when you look at a work, you know it is powerful or at least has a powerful message for you.

The technique of how these works were constructed was explained in a  Press release of the New York show for Farber held also in January at the Van Doren Waxter Gallery.  I have reprinted this below:


"These large-scale, process-driven paintings were constructed with Kraft paper that Farber meticulously layered to create a strong foundation for paint. Three-foot squares of paper were joined with one-inch seams and then cut into decisive shapes: lozenges, trapezoids, ovoids, etc. which he laid out on top of plastic sheeting. First he poured acrylic paint over the surface, dispersed it using rollers, then flipped it over onto the plastic to dry - where after a preparatory soaking with water he would repeat this process on the other side using a deliberately different, yet complimentary color, this time adding a sheet of muslin that the paint would be poured over and which was later removed. The seams guided the water and paint, dictated how the two colors merged and interacted with each other. This method resulted in works where the surface and image became one.

In addition to this consuming, permeable painting process, Farber utilized linear underdrawings on the raw paper made with snapped chalk lines and by dragging a paint-soaked piece of string over the painting’s surface to create pockets of movement that added a certain depth to the image’s surface. The resulting lyrical façade looks atmospheric, planetary, aqueous and geologic, with layers of color and the natural creasing of the paper. Crackled paint, veins, scars are all part of what makes up the “skin” of these paintings."


Matthew Hebert: Cover to Cover and Jeanne Dunn: Wild Walk at the Athenaeum

In Cover to Cover Matthew Hebert presents work that draws inspiration from artists’ books in the Athenaeum’s collection all chosen from those published in 1975, the year of the artist's birth. Hebert has done us the great favor of looking at this selection and taking the best possible bit out of context and reproducing those very words with 3-d text. It look like jig cut wood and some of the most intriguing of these almost seems to disintegrate. The exhibition is hung with the very books on display and opened to the text. The entire set of quotes is places in the board room and the table that is always present in that room is placed on top in its normal place. One of the examples is a Baldesari conceptual work:

Four Events and Reactions:
1. Putting a finger in milk
2. Touching a cactus (Touching a cake)
3. Putting out a cigerette
4. Pushing a plate off of a table 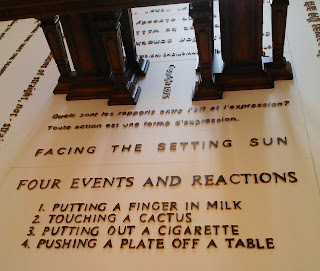 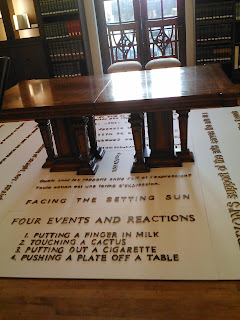 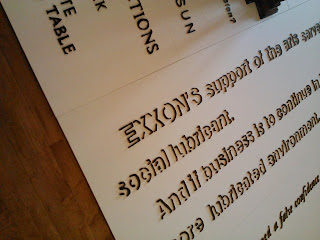 In addition to these site specific interactions with the Athenaeum, Hebert exhibits six Opaque Displays. These are sculptural square metal boxes with peep holes on two sides. They house mechanical dioramas depicting works of post-minimalist art. Hebert is re-purposing art works and that gives us a new view of old favorites.

Jeanne Dunn's walk was not very wild but there were some charming small watercolor that were vibrantly full and satisfying.

My bonus post is a painting by JC Carino at Thumbprint Gallery. Thumbprint consistently shows Dark Art, Outsider Art and Lowbrow Art and art inspired by Graffiti Art. They have two locations...one in Hillcrest and one in La Jolla on Kline Street. 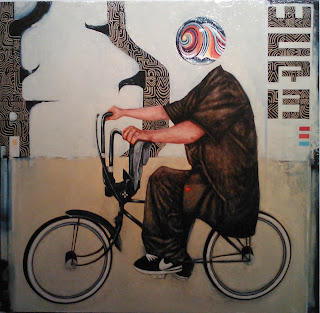