The San Diego Dance Theater under the leadership of Jean Isaacs continues to amuse, enchant, and otherwise provoke the avid consumer of the arts. Yes, many in San Diego pay attention to sports, movies and the beaches; but when the spinning worlds of recreation slows to an appreciation of the moving arts, the attentive find themselves in Jean Isaacs' programming.


How does Jean Isaacs see these new works in the context of the type of dance theater she's espoused and developed:

Jean Isaacs:  This festival is for niche audiences, those that want innovative programming, not more of the same. The idea is one of attending the show with a sense of adventure: What will I see tonight?

In general, the Live Arts Fest dances attracts a more youthful audience; however, the Aging Creatively evening on April 16 features our seniors and  they will fill the house to support programming that showcases folks that look like them.

Here are some of the many live arts being offered: The first evening features bkSOUL's Love H.E.R.; it has spoken word poetry, hip hop, and modern dance. Other, compelling performances -- all of them are really compelling, but there are those that give one pause: The Animal Cracker Conspiracy features puppets for adult audiences (not pornography, but adult -- we struggle with language at times); this performance is by two of San Diego Foundation's Creative Catalyst artists, Bridget Rountree and Ian Gunn.

There are also two Latino-inspired performances, the Latino evening features flamenco, tango, and salsa dance in a party atmosphere; also, Grupo Minerva Tapia will be joining us from Tijuana.

Charles Weidman's Lynchtown is a classic modern dance piece from the 30s. There are so many good things to see.

You really need to see the entire list of performances:


Reflections of a Visual Artist

There are so many interesting ways to capture movement, especially dance. The advance of camera technology and related software adds to the 'ways of image capture and its transformation.'  Even photorealistic images are transformations despite the illusion that we are see the 'real' thing in such photographs.  Of course, as one moves along the continuum towards abstraction (or a scaled view of a photorealistic image that seems like an abstraction), we pass through a variety of stylizations.  Software and camera apps make an easy (or, at least, an easier) jump in this direction.

The images I've selected originate either in my Nikon D50 converted infrared camera or my Samsung ST200F point and shoot.  The latter has painting apps built into the camera.  So much technology for so minimal a cost.  Selections of more expensive cameras bring hardly noticeable lag time in image capture as well as being able to stop the action in low light with little noise. Being aware of what one wants in an image helps determine which camera (and at what cost) to use. Image editing programs compensate in crafting image making in ways not doable inside a camera or as easily or as well (or perhaps the watchword is 'not yet.'

Jean Isaacs Trolley Dances offer a different set of challenges than performances at White Box. Environmental context (in and out of doors) vs. a theater setting; performances often within a surrounding audience vs. audience set apart in a theater setting; lighting characteristics of outdoor settings as well as indoors vs. spot lighting crafted by theater technicians.

San Diego image makers, if they so choose, are lucky to find collaborative image sources in the Jean Isaacs/SDDT performances.  These are the moveable feasts of the visual artist.

And, of course, there are any number of ways to further explore the imagery with collage/montage. 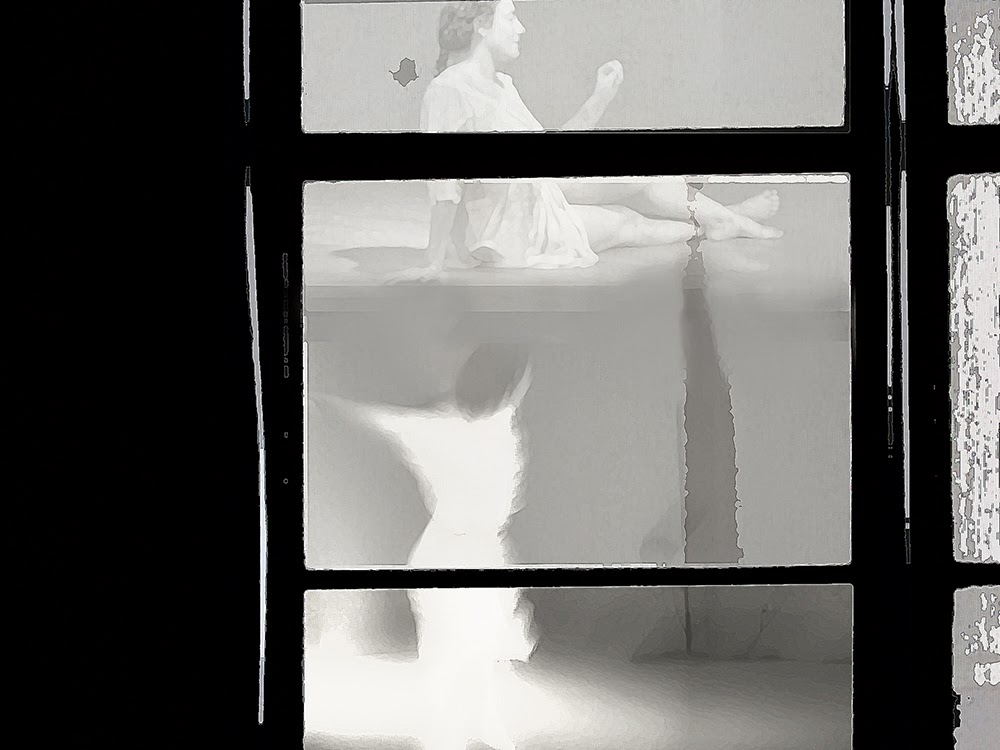