Multi-disciplinary artist Jose Hugo Sanchez lives in Tijuana but moves back and forth across the San Diego/ U.S. border regularly to teach and work.  His art, combining printmaking, sculpture, painting, drawing and performance, is a mix of current and historical imagery and cultural iconography of both the Mexican and American cultures. His current exhibition, Transpoiesi,  is dominated by several monumental 16 foot by 6 foot works on brown paper combining block-printed woodcut engravings of indigenous characters from mythology and abstractly painted backgrounds.

Works are loosely rolled out from the wall from high-hanging wooden rods unfurled onto the floor.  Portions of each work remain rolled at the floor because of the limited height of the gallery walls but enough is visible to reveal Sanchez’s powerful emotional images block-printed onto the simple brown paper and arranged in various configurations.

Also included in the show are several works generated from engraved woodblocks previously used for creating works on paper. Sanchez has carved into them, shaping them into sculptural wall compositions transformed into art pieces. In some of these works, Mexican and American icons including the Virgin de Guadalupe, the Statue of Liberty and Mickey Mouse are visibly intertwined with mythological primitive-looking human and animal faces and figures.

Visible traces of the raw physicality of the process of carving of images into the wood reveals the artist’s intensity, energy, vitality and singularity of purpose.  We may surmise he is alluding to the conflictual and blending of cultures, as well as noting his own political views about them. With few exceptions, Sanchez limits his color palette to blacks, grays and earth tones.  Two sculptural works displayed on pedestals in the center of the gallery are carved from wood and cardboard and painted. One piece “El Quinto Sol” is composed of interlocking cardboard organic shapes painted with black and white figures and body parts. The other “Rayuela”, is a wood sculpture composed of many individual wooden parts pieced together including small animals, animal heads, and pieces resembling machine parts, all painted gold.

Sanchez’s work follows in the tradition of Mexican printmaker Jose Guadalupe Posada and the Taller de Grafica Polular, as well as referencing German Expressionism and the primitive figurative works of Rufino Tomayo. Visiting this exhibition, viewers can’t help but feel the impact of Sanchez’s bold strong imagery of the Aztec tradition and mythology, as he simultaneously explores both the tenuous and collaborative connections of cross border relationships. 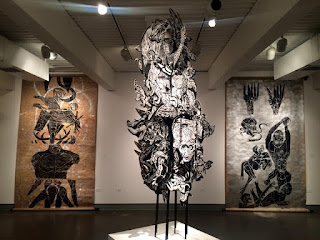 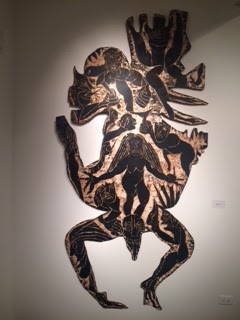 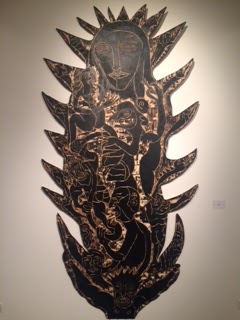 Posted by ARTFULLIFE BY CATHY at 5:33 PM