Richard Deacon: What You See Is What You Get

I am a huge fan of sculpture. I have a master degree in this field and it has always been one of my passions. I have also been a painter half of my life, but as a glutton, why have two dimensions when you can have three.

I was immensely looking forward to the Richard Deacon exhibition at the San Diego Museum of Art.  What a treat to see again a major show by a major contemporary artist in this space which has not recently given that much exposure to contemporary art. Don't get me wrong, I love the large pieces out in front of the museum and the works in the sculpture garden, but an in-depth show of one artist does ring my bell.

This show does not disappoint. The craft of making is on view in some pieces, others are highly finished. There are large impressive structures. How did they even get those into the space? There are small intimate works that allow you to see the humor and connect more directly to the artist. There were wonderful shadows created in the space from the well thought out lighting and some amazing vistas from one work, through another to a third. I just found out that photography is allowed in this show so I might just have to go back. The show is heavily guarded and I wrongly presumed it was a no photo area but   once I relaxed my reporter duties, I was able to be even more in the moment. One work not illustrated here was a vast structure that looked like part of an air vent from a space station. You could also imagine a homeless person making a habitat in this seemingly discarded piece of urban debris. But the twist of the structure and the variation of the two opening ends gave it an elegance that proves intention.

The show is up to June 25 and I urge not to miss it. It is impressive but can only be experienced up close and personal. 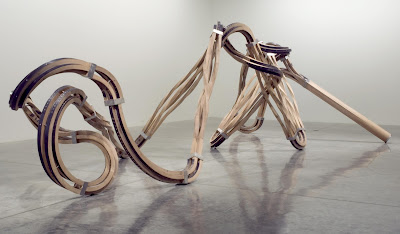 Richard Deacon: What You See Is What You Get is the renowned British artist's first major museum exhibition in the United States. Winner of the Turner Prize in 1987 and the subject of a survey at Tate Britain in 2014, Deacon has been exhibited frequently internationally and remains a pioneering figure in the field of contemporary sculpture. A self proclaimed "fabricator"—a maker of things and of meaning, neither carved nor cast—Deacon sidesteps the issue of technique by never focusing on any one material, challenging the viewers' expectations with unusual combinations. While the titles of his work can appear literal, they often invoke a range of metaphors, as well as mythological and literary allusions. The full range of the artist’s oeuvre includes free-standing sculptures and wall-mounted works, to glazed ceramics and works on paper.
Richard Deacon: What You See Is What You Get includes roughly 40 works from more than three decades of Deacon's oeuvre. Along with loans from private collections as well as from institutions including the Museum of Modern Art in New York, San Francisco Museum of Modern Art, and the Hirshhorn Museum and Sculpture Garden in Washington, D.C., this exhibition will debut a new work by Deacon.
On final event occurs on May 15 | Lecture with the North County Chapter Support Council