I am happy to now report on the second set of shows that opened at the Oceanside Museum of Art. We covered Fred Tomaselli and Maidy Morhous in August which are ongoing.

James Hubbell: Seeking Balance is billed as a retrospective. It was curated by Danielle Derry but I found it a view of his work on a very personal intimate level. There was a previous show of Hubbell's work at the museum which was mainly very masculine metal sculptures. If you have ever toured his home, you get a taste of the extravagance of his built work and the immensely natural decorative treatment  of almost every surface.  There is a taste of this in the  film intro to the show, which is a short version of the longer KPBS film to be shown in 2019.

But here what we see are the smaller works, some of which are maquettes for larger buildings but some are simply Hubbell playing with found objects and making spontaneous watercolors. We get an idea of the range of his works in a series of small photographs, but not the scale of the works, that are in real life are grandly impressive.  Only Hubbell could conceive and bring into reality a series of parks across the ocean....as intimate as a string of pearls but covering a vast space.

I like this intimate view which stresses his ideas of everyday beauty and the hands on importance of making things. The smallest thing can inspire him and you walk away thinking you could do the same instead of thinking, "This is a genius and I could never reach his heights."

Of course, someday, I would like to see a show which has giant images of some of his buildings, displayed on expensive back lit transparencies or parts of the  buildings actually re-created so we can walk through them with lots of works borrowed from all over the world; An exhibition like that outside of San Diego would show how very lucky we are in Southern California to be able to go and see  his home with several structures and the foundation building. But for now, this very honest show reflects this gentle soul, James Hubbell,  who walks quietly through our lives showing us all how to be perfectly balanced. 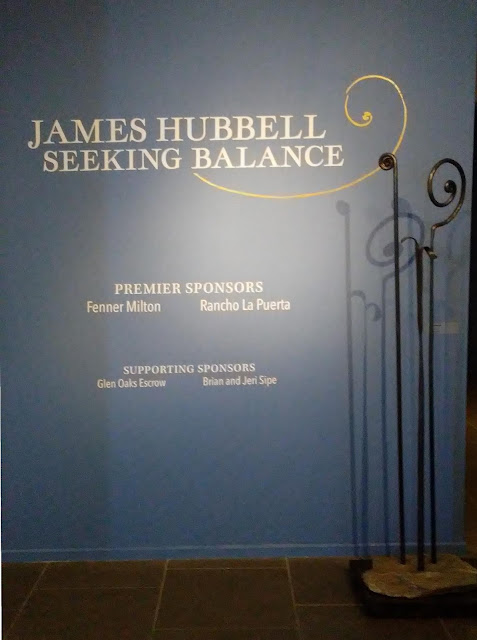 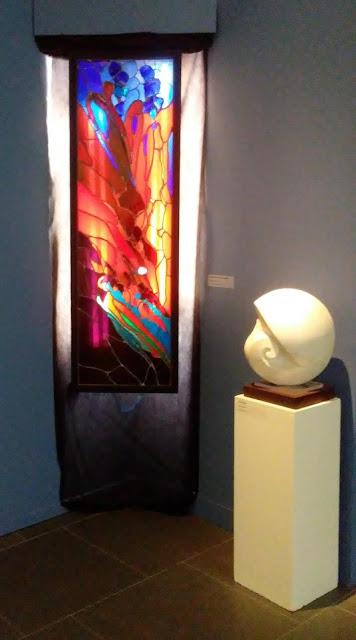 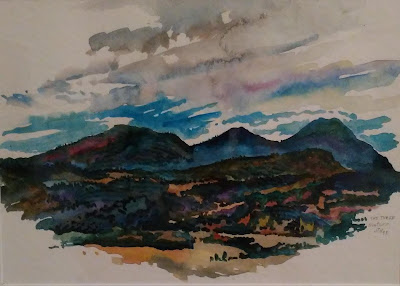 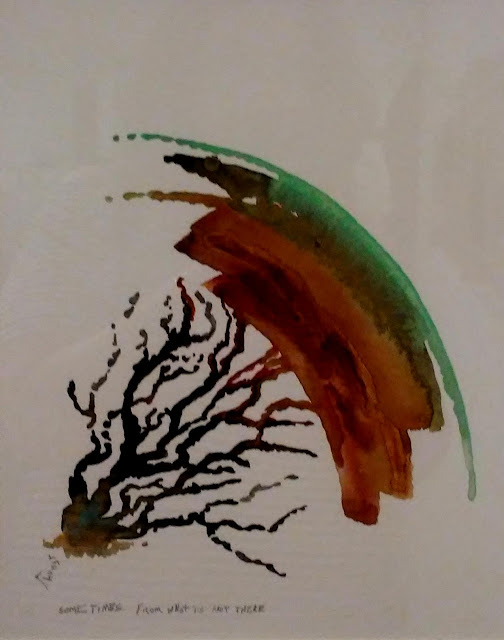 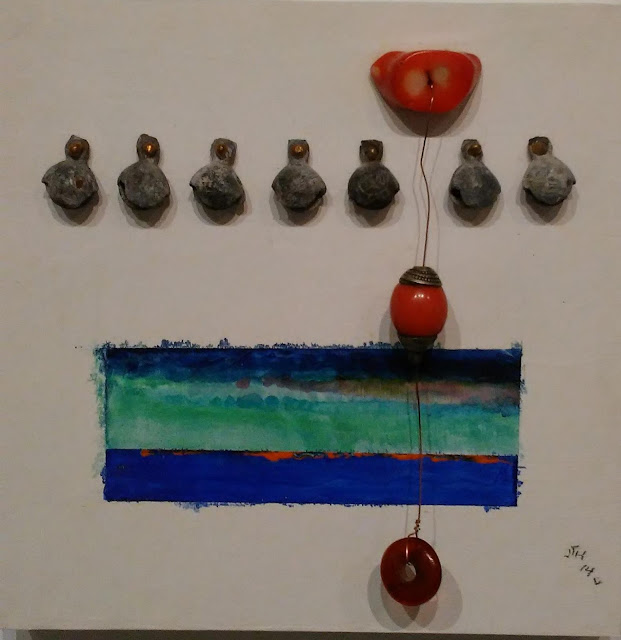 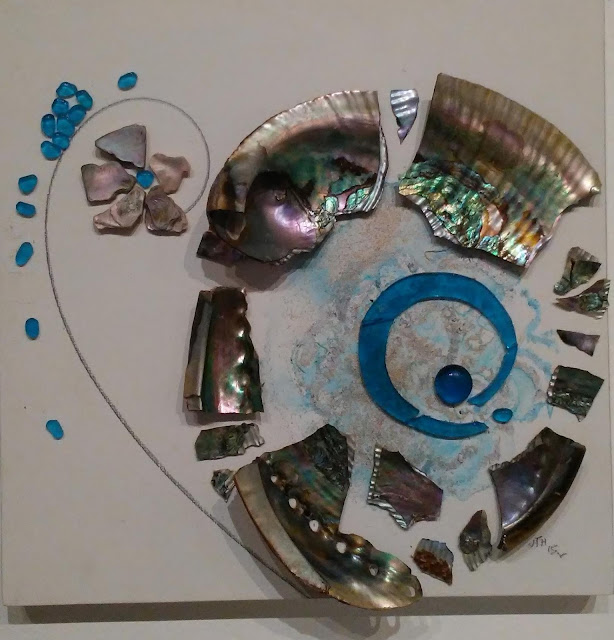 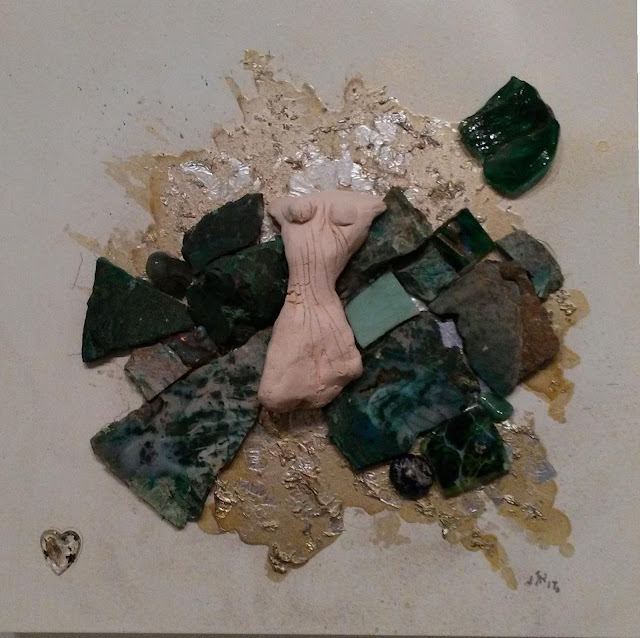 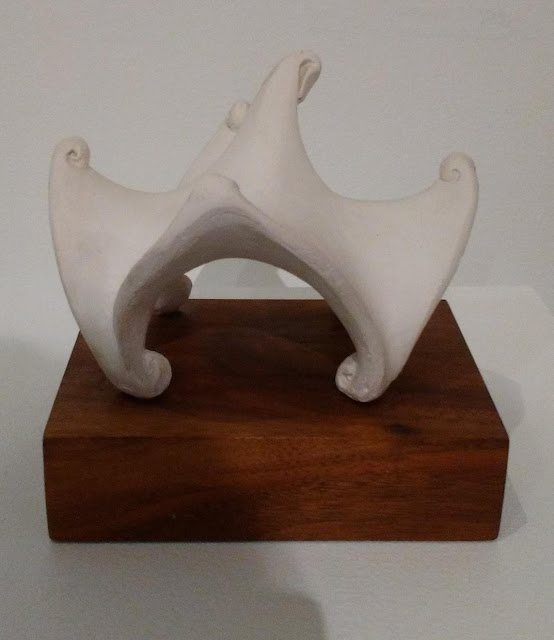 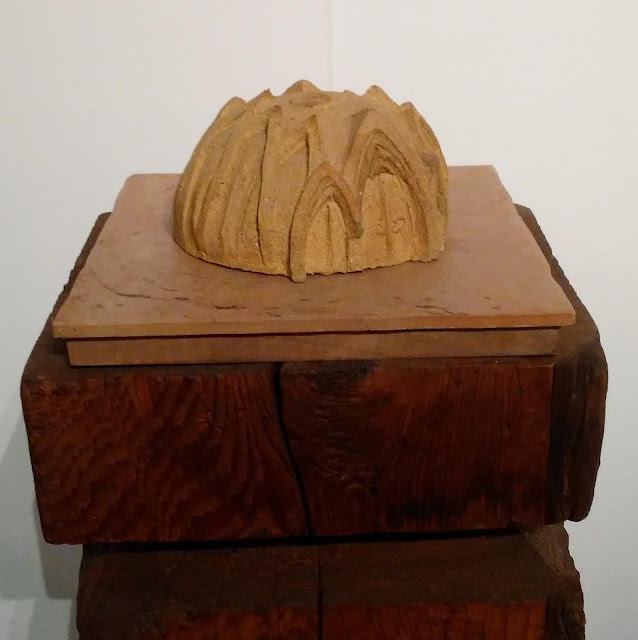 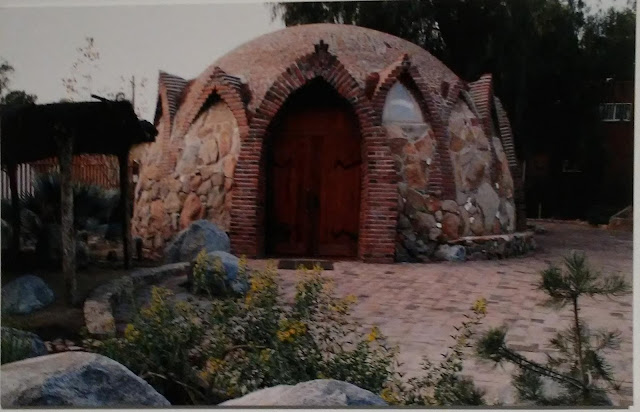 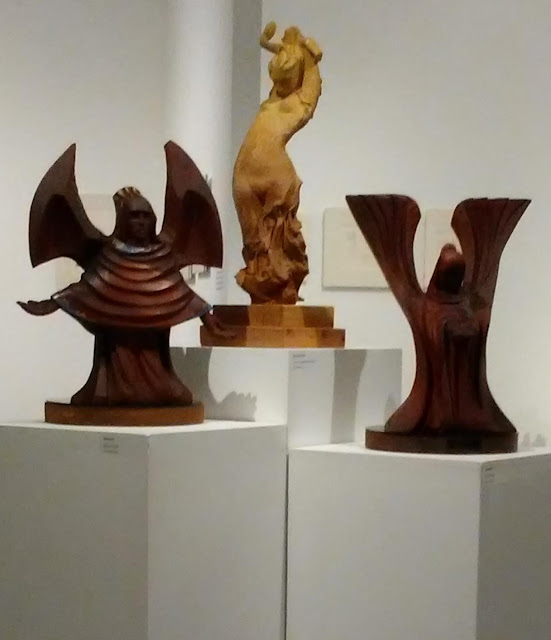 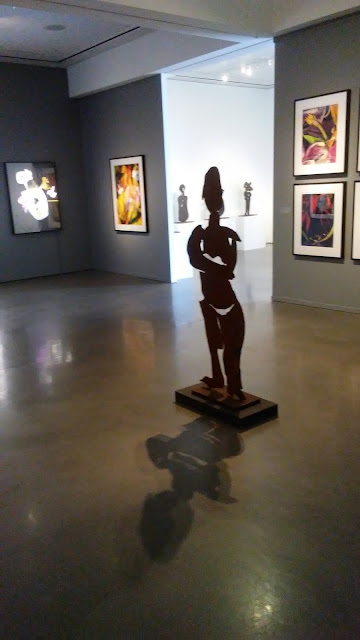 Thanks to Mark-Elliot Lugo, the curator of this exhibition, a whole new fan base for Fraiya Fredman can be created.  Fredman was able to take very slight watercolor gesture paintings and turn them into to strong graphic statements honed out of steel. These flat sheets welded to bases can stand on their own.  But they are also a component further influences by a series of colleges of natural materials. This next generation of sculptures is  layers of steel combining those gestures with organic shapes into more 3-D compositions. These are very reminiscent  of the structures of some late Stella sculptures.


The collages especially when back lit are very successful. But this is not a woman who sees in 2 dimensions. So her work with lenticulated film gives her that extra third dimension that she seems to crave. As you move, the surface reflects the images in layers and so an interior optical space is created. We have now seen this effect on postcards and scary Halloween wall hanging from the 99 cent shop, but Freman is starting from such a quality image, that we are happy to be stimulated by her vision in this way. 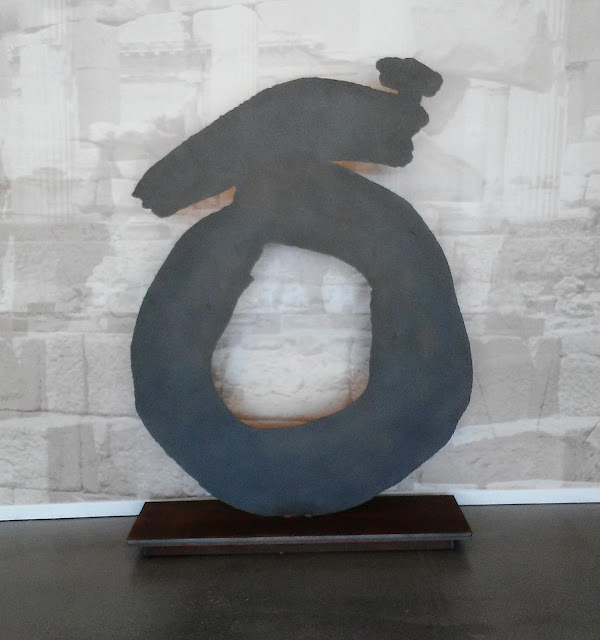 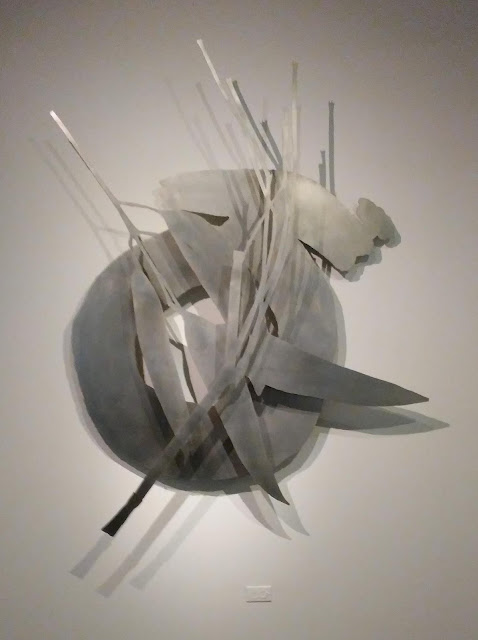 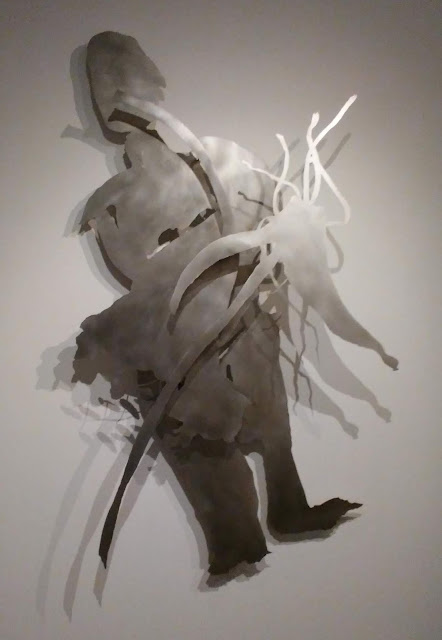 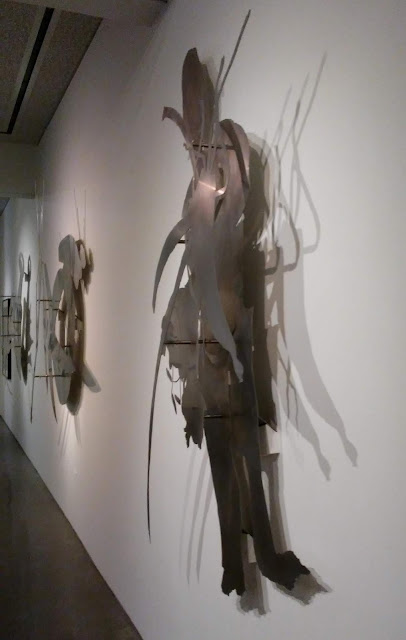 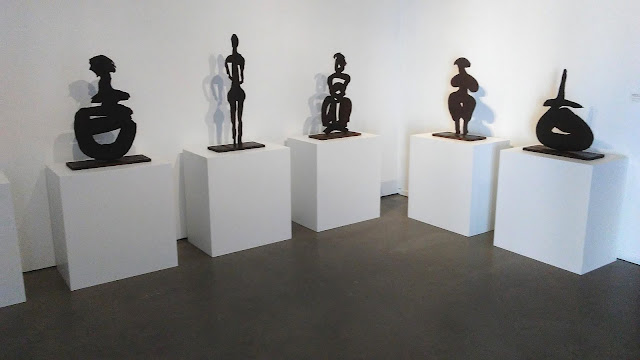 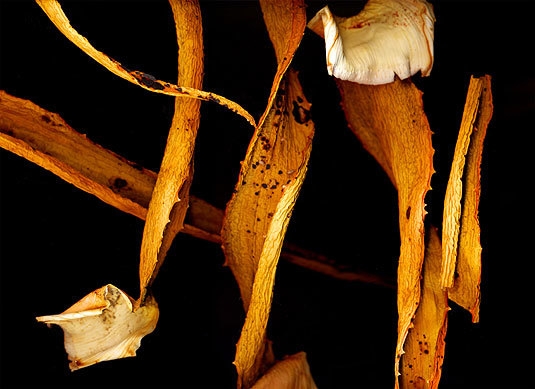 Brandon Ragnar Johnson's presents a stream of large posters leaping up the stairwell  of OMA and bringing mirth and fantasy to one of their biggest  yearly events, the Art After Dark Halloween party.  I loved these bright depictions of iconic witches, cats  and devil women giving out a sexy "don't get too close or I will curse you, scratch you, and send you to hell" message. 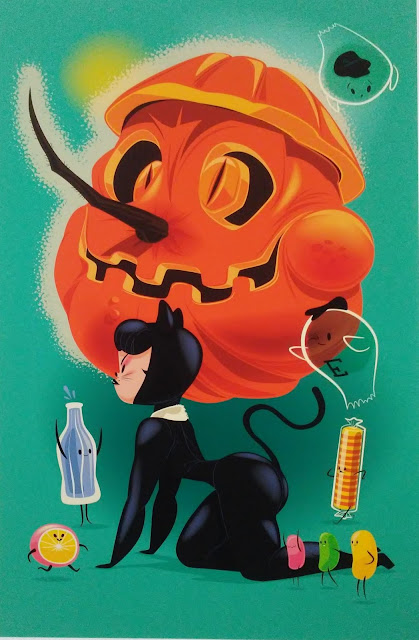 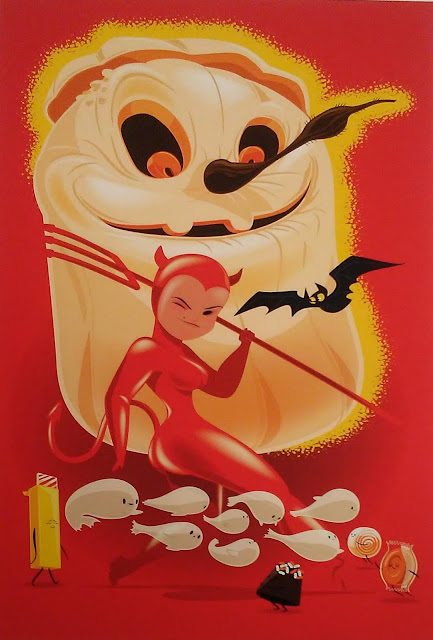