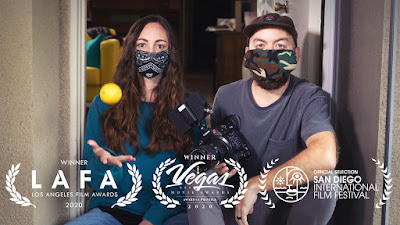 This is the 19th anniversary of the San Diego International Film Festival and from October 15-18 they’ll be screening 114 films from around the world, most of them San Diego, West Coast, U.S. or World Premieres.

But this year, it’s a whole new game, with rules determined by Covid-19. Besides online live-streaming and on-demand screenings and special events in a Virtual Village, there will be four Drive-In Movies in a parking lot at Westfield UTC, for film-lovers eager to get out of their living rooms and back to a big screen.

A number of the films—which include feature-length and short-form dramas, comedies, documentaries and animations—are about ch-ch-ch-changes and involve dealing with difficult situations and creating new beginnings. And considering how many of our changes this year have been Covid-related, it’s interesting that one of the most affecting films is done by a San Diego couple who were both infected by the virus and decided to make something good out of their experience.

Like many of us, Chris Francis, a documentary filmmaker, and his wife, Krista, an office manager for FitBit, were leading an active and pleasant life until one Friday evening in March, when she noticed she’d lost her sense of smell. Not only that, she couldn’t taste anything: a raw onion tasted the same as yogurt; only the texture was different.

She did some research online and found a few studies suggesting that these symptoms were a side effect of the new virus. That Monday morning she was tested; two days later she learned she was positive. It turned out Chris was positive too.

“At night, when I went to bed, I’d start coughing, and I just couldn’t stop,” he said, when I spoke with him recently. “It’s been seven months now, and I still have a little cough. Krista has some of her sense of smell back, but only about 10 percent of her taste.”

They started quarantining, not doing much of anything except keeping away from other people, trying to get better and not worry about whether they might get worse. Thankfully, they didn’t have to be hospitalized.

“Since I was a filmmaker stuck at home in a one-bedroom apartment, I figured I’d document our story as it happened,” Chris said. “It would give me something productive to do.”

He decided to highlight some of their lighthearted moments and also show how they found ways to make themselves useful, by participating in Covid-related research studies. What happened to them was, as Chris says, “not the funnest thing in the world,” but the film has turned out very well. Its title—MAKING LEMONADE: OUR COVID-19 STORY—indicates that the couple not only tested positive but kept up a positive attitude. Now it has brought them awards in L.A. and Las Vegas, and been hailed as moving, inspirational, and often surprisingly funny. You can see for yourself in on-demand screenings anytime during the four-day festival.

Two other films you won’t want to miss, both about life-changing journeys:

NOMADLAND, the Festival opener, has already won major awards in Venice and Toronto. It stars one of my favorite players, two-time Oscar-winner Frances McDormand (“Fargo” and “Three Billboards Outside Ebbing Missouri”) as a 61-year-old woman who loses everything and takes off in her van to find work on the road. Appropriately, this is a Drive-In Movie: Thursday, 10/15, 6:30 p.m.

150 MILLION MAGICAL SPARROWS is a compelling Indian film about a 9-year-old girl’s search to find and free her “disappeared” 7-year-old brother. (On-Demand Screenings)

With 114 movies to choose from, it’s hard to believe you won’t find something completely different from what you’ve been watching on Netflix. For full program and tickets go to www.sdfilmfest.com

Lonnie Burstein Hewitt is an award-winning author/lyricist/playwright who has written about arts and lifestyle for the La Jolla Light and other local media for over a dozen years. You can reach her at hew2@sbcglobal.net