Angela Washko is a performing art star. She was never really satisfied with her training in the visual arts as it did not seem authentic to her own interest. Very early in 2006, she started role playing in the World of Warcraft online game and was certainly a star there with a large following and lots of high powered awards. By 2012 she was fed up with what happened when fellow players discovered she was a girl. Not only did she decide to form The Council on Gender Sensitivity and Behavioral Awareness within the game, she made this an outside/public art project. She needed the reputation of her avatar to be able to hold sensitive and revealing sessions about gender discrimination within the game. 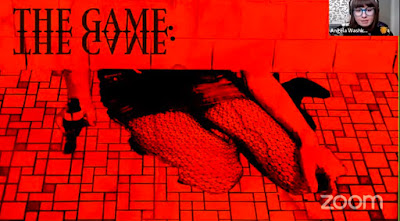 Not too surprising that led her to take a deep dive (with a nice grant) into some of the feminist issues surrounding the manosphere/alt all of the Pick Up Artist. These are men that specialize in telling other men how to break down women’s resistance to sex. The Pick Up Artist did not take well to this exposure and the video. TheGameTheGame is what she created to help women understand what these men were doing, resist or even turn the tables on these guys and pursue them

Pick Up Artists like Roosh V with his multiple Bang books, seminars, digital instructions have now gone from being seduction guides for their community to life coaches but they still exist. Banged is her revealing interview of Roosh V and led to Alpha Game, 2019 made from a code designed to take his most used phrases and create poetry then lyrics for the Alpha song.

Angela Washko has made many other bodies of work and it is well worth a visit to her website to see all of her work. An early video Millionaire Worthy is a take off of the reality TV show Millionaire Matchmakers. She analyses the top 100 qualities that those millionaires on the show requested. This tongue in check take off asked if you are worthy and do you want to pay $39.99 to find out how to capture your own milliionaire.

In her most recent documentary Workhorse Queen we learn of the after effects of  rejected candidates from the RuPaul drag queen reality show. This is a sympathetic view of what a queer role model could be.

Washko, needless to say, has had to learn how to create a safe space for herself online because her works are provocative. But when you hear her speak it is from a place of genuine interest. Her performances are interventions second, but seem first to come from a genuine desire to learn more.

At the end of this interview, she spoke of her teaching experience which has widened her scoop and added more and more mediums to her arsenal. She is certainly a gladiator amongst media artists.

You can watch the whole interview below or YouTube Stream: https://youtu.be/1w3KCjErLbg

Angela Washko is committed to telling complex and unconventional stories about the media we consume from unusual perspectives. She is the founder of The Council on Gender Sensitivity and Behavioral Awareness in World of Warcraft, a long-term intervention inside the popular online video game. A recent recipient of the Creative Capital Award, the Impact Award at Indiecade, and the Franklin Furnace Performance Fund, Washko's practice has been highlighted in The New Yorker, Frieze Magazine, Time Magazine, The Guardian, ArtForum, The Los Angeles Times, Art in America, The New York Times, Rhizome and more. Her projects have been presented internationally at venues including Museum of the Moving Image (New York), Los Angeles Museum of Contemporary Art, Milan Design Triennale, Kiasma Museum of Contemporary Art (Helsinki), and the Shenzhen Independent Animation Biennial. Angela Washko is an Associate Professor of Art at Carnegie Mellon University.