THIS IS A CITY 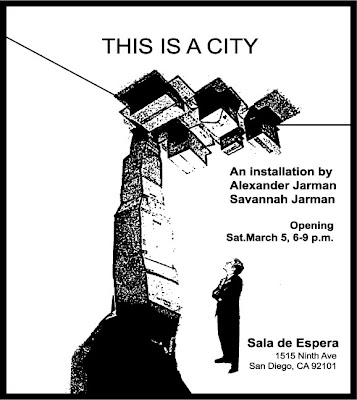 This Is A City was made using the vernacular of its subject matter, which is the relationship of a city's inhabitants.  The aesthetics of the work are partly cartographic, but the piece is not meant to be a guide so much as a document, a witness to the multiple narratives of San Diego's citizenry.
The cardboard box has many uses and re-uses, and so any one box has the ability to enter into many people s lives; many people, across many socioeconomic lines, many geographies and many histories.  Boxes can do so mostly because of their relationship to commerce.  Andy Warhol found his Brillo Boxes to be a radically democratizing blurring of any distinction between art and life, but more importantly a blurring of the classes.  Warhol famously pointed out the power of the mass produced good using Coke as an example.  The queen of England, the prostitute, the famous television star and the homeless citizen- none of them can buy a Coke that s any better than the Coke anyone else can drink.  So too are boxes included in this group of objects that are seemingly equally accessible.  Unlike a can of Coca-Cola though, boxes more often share their lives with multiple, diverse individuals before they are ever discarded or recycled into something else.

To better illustrate this point, take the following constructed narrative: A cardboard box is assembled on a factory line, then filled with consumer goods on a different line.  The box travels from its shipping facility in one state to a retail store in another.  When the goods are purchased, the box journeys to the consumer s house, where it is unpacked and placed in a hallway.  The box is discovered by a neighbor, who picks it up and uses it to house his/her belongings, as they are preparing for a move across town.  Having made the trip, the box is placed in an attic for many years before finally being discarded in a recycling bin.  The box is subsequently picked up by a homeless citizen, who uses the box to house their blankets by day and shelter them at night.  We suppose this narrative only to illustrate the possible histories and narratives imbued in a cardboard box and to argue that it is a suitable material to play document to the city.

The piece is largely installed overhead.  Often we see boxes on a retail shelf (installed either at eye level or not much higher than) or view them when they occupy a space much lower than eye level (maybe on the floor in the office, maybe as a makeshift bed for a homeless citizen).  By placing the material overhead, the stories and histories contained in the boxes and the people they represent are given a position of power.  By physically elevating them, we hope to make them unavoidable.

These vessels are not empty.  As stated before, they are full of rich narratives.  We are pleased to share these stories with you, and to remind you that you are a part of them.

Is my apartment that, for over a year, has been a place for transformation, a waiting room for happiness. My question to resolve is how to reconstruct the endless desire to delve into the world and the rest of things - A question that the Spanish scientist and lawyer Eduardo Punset asks publicly. The artistic processes occur through extensive time of reflection and through interaction with other individuals, as intelligence does not exist if not social.  Similarly, happiness ceases to exist without emotional interaction and interconnections that make up the individual as being free on one side and happy on the other. Sala de Espera I see as a place of artistic exploration that does not aim to generate public objects, but rather to delve deep into the primary and private processes of an artist who is invited and given his or her own key to come and go for a month in my home - creating an experience. For my part, I will live with the pieces and/or experiences of each artist and will serve as support in their completion.

- Judith Pedroza
lachicaquenorecibeanillosdediamante.blogspot.com
Posted by Kevin Freitas at 10:14 AM