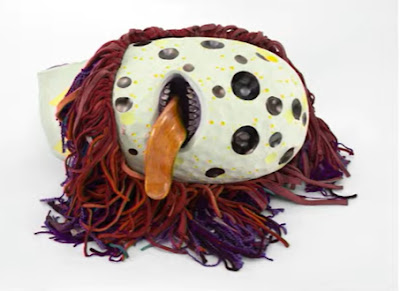 Wow, Wow, Wow! Cannupa Hanska Luger is one amazing guy. He is currently the Longenecker-Roth UCSD Visual Artist in Residence and his lecture was charming, funny, unassuming and authentic. It was also non-linear. He asked for questions through out but you know how student are, they waited until the end. But that is where the lecture all came together. So I am not organizing this report in the sequence in which he presented his slides, but in a more holistic way that I think is more in keeping with his practice.  Of course, I encourage you to listen to the lecture yourself so you get the full experience.

I will preface this to clarify that all the slides he showed are from his latest work: Future Ancestral Technologies and to state that Luger is an enrolled member of the Three Affiliated Tribes of Fort Berthold (Mandan, Hidatsa, Arikara, Lakota and European descent).

About his materials:
Lugar did not talk about ceramics, only about clay. He loved that clay limits him and showed him that he could not control it. He had to learn to removed his expectations of a pre-designed outcome.  This taught him patience and made him humble. He states, “You can do anything clay wants you to do.”  This led to the believe that all materials have their own agency.

For examples he collects and used Afghan blankets, mainly found in charity shops.  He can vouch for the care that has been taken to create it. A hide of leather which might be a more traditional Indian medium, not so much. He makes an effort to eliminate waste. There are lots of sheep in New Mexico where he lives and so he works with wool. But he discovered a secret ingredient that he made public. He found that a glue gun is much better than other methods for attaching the blankets into the costume he creates. 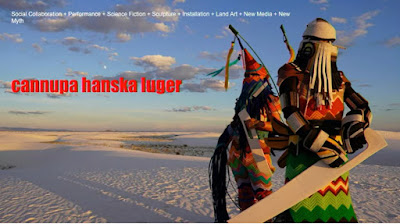 About Time:
Once the figures are costumed, they come alive in documented performances.  The clothing of his super heroes have a use. But once they go on display they become objects. But Lugar believes art is a verb, not a noun. Although the noun artifact can do a good job of educating, it is the verb art that is the living process. And that process of time passing affects our everyday life. 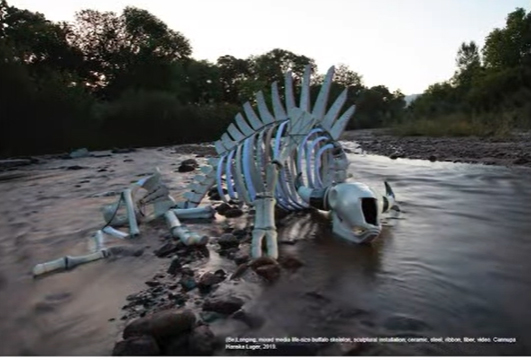 For example in the Buffalo Calling sculpture, he tells a wonderful story. His tribes for generations knew the buffalo was plentiful but migrated.  At a certain time of the year there was a ritual to call them back to their lands.  The ritual was banned and then we all know that the buffalo became very scarce on the edge of extinction. His father and grandfather brought back the ritual and now there are buffalo again.  Lugar know there is science involved in re-stocking the buffalo, but there is also magic. And more important, there is a lesson about how if one removes a species at its height, there will be an affects through time. 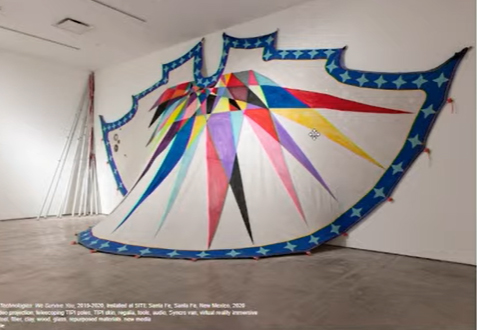 Tackling his nomadic roots, he also needed to construct a Tee Pee and that had to fit in his Honda Civic. He again needed to use non-traditional material to cross time. Strong supple nylon and  telescoping poles were necessary. His dream was to use carbon fiber but not at $1500 each so he used collapsing aluminum flag poles and now has a bag of flags to use some other way.  But the tradition of 13 poles endures to mark the seasons and the entrance is low so you bend over to enter i.e.  you humble yourself. 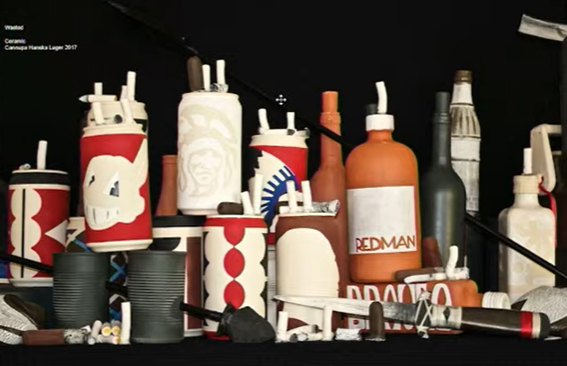 About his Career:
There are many school teams and businesses that have appropriate Indian symbols as mascots.  They make money selling goods so branded. Lugar, after pop up music events, noticed a line-up of discarded cups, bottles and cigarettes littered the site. In his piece Wasted he took that aftermath of the party, and recreated it as mascot artifacts. The time he spent making 300 clay cigarette butts would justify the cost for the labor spent, but this was a start.

Museums and the Art Market are a Preservation Model. But Lugar prefers a Maintenance Model. The second allows for culture to be every changing. His real interest is how adaptation to limitation is real culture. Lugar realizes he now has privilege. Yes, it was won with effort and sacrifice, but the more privilege he has, the harder it becomes to be authentic and changeable. This is a constant challenge, but he appears to delight in that challenge.  “The Hip in Hypocrisy” was one of his jokes. 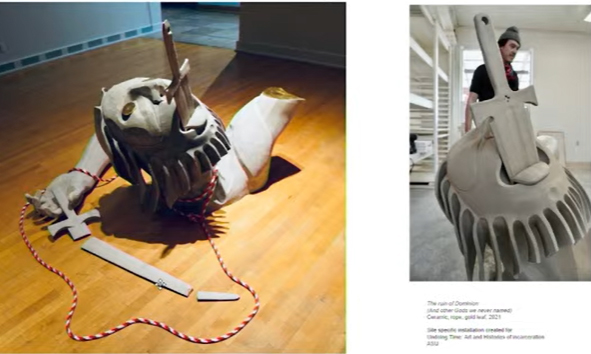 Dominion over Death is his toppling of the domination god who is a sword swallower, killed by his own sword.  In this title, Dominion is the idea of being able to control everything by dominating completely. He believes our society has bought into this completely. His hope is that the youth of today can change that. 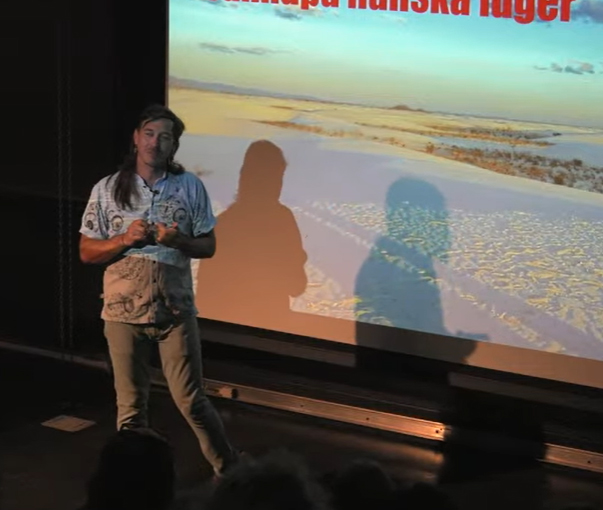 About his Viewpoint:
If you are white in the melting pot of the US, you have had to have become disconnected from your original place. All non-natives suffer in America from displacement. The white American sense of self is mainly bases on rugged individualism, rising up from your own bootstraps.  Native Americans were raised with a strong believe in care; care for the land and care for each other. When the white man arrived in American, the Indians treated them with this same care. White man thought they were being treated like Gods and so Gods they decided to become.

We are not gods but we all search for self identity. But we are not one thing.  We are all part of a system. If we do not recognize this, we remain isolated. When we are isolated, we are scared and lonely.  That is when we will harm each other. So Lugar has a strong believe in learning what it means to belong to place. If he can do that in his work, the world might be a better place.

Advice to Students:
Never stop working. Dogged practice outshines genius. Aim low and give it everything you got. Celebrate every victory. Learn as you go along. Stack up your victories and that takes care of the everyday losses.

By the Book:
Cannupa Hanska Luger is a multidisciplinary artist and an enrolled member of the Three Affiliated Tribes of Fort Berthold (Mandan, Hidatsa, Arikara, Lakota and European descent). Through monumental installations and social collaboration, Luger activates speculative fiction and communicates stories about 21st Century Indigeneity, combining critical cultural analysis with dedication and respect for the diverse materials, environments, and communities he engages. He lectures and produces large-scale projects around the globe and his works are in many public collections. Luger is a recipient of a 2021 United States Artists Fellowship Award for Craft and was named a 2021 GRIST Fixer, he is a 2020 Creative Capital Fellow, a 2020 Smithsonian Artist Research Fellow, and the recipient of the Museum of Arts and Design's 2018 inaugural Burke Prize, among others.
Cannupa Hanska Luger is opening his studio at UCSD on Oct 14 from noon to 2 pm. 252 Russell Ln. Visual Arts Facility 309 Main Gallery. Please register: https://www.eventbrite.com/e/436580813967
Posted by Patricia at 7:57 PM