Picked RAW Peeled: THIS IS A CITY

Sala de Espera or Waiting Room is an artistic project conceived by San Diego artist Judith Pedroza.  THIS IS A CITY put on display by the brother sister team of Alexander and Savannah Jarman is the waiting room’s second project to date.  Pedroza views her waiting room as “a place of artistic exploration that does not aim to generate public objects, but rather to delve deep into the primary and private processes of an artist who is invited into my home, given his or her own key to come and go for a month creating an experience along the way.”  However, there are several variables that can affect the outcome of these experiences, notably; the clarity of the concept and its execution given it’s someone’s apartment and not an art gallery.  Hanging pictures on the wall will not suffice to create those experiences. 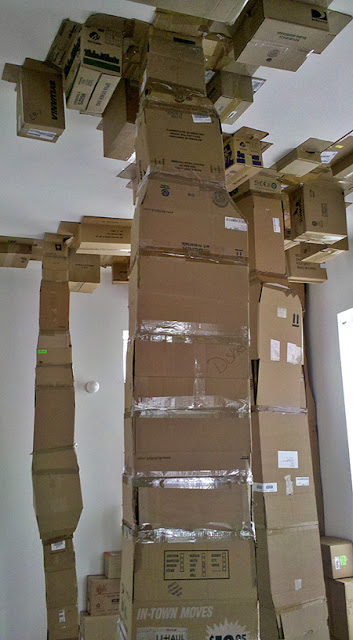 And while apartment exhibitions aren’t a new idea – though they seemed to be when the economy tanked a few years back – it IS for San Diego.  Pedroza should be praised and supported in this new endeavor.  It is revolutionary, a Trojan horse storming the gates of our rather staid and conservative arts scene here.  The willingness of both Pedroza and her husband to reside in the apartment during these experiences is also commendable – it is their home after all – and makes for an even more exciting and rare showing of support for the artists in the community.  Should Pedroza relish her new curatorial role as much as she does making her own artwork, we will not be kept waiting long for new and adventurous exhibitions of local talent.
In THIS IS A CITY, Alexander and Savannah Jarman have constructed several towering (city?) effigies out of recuperated cardboard boxes, stacked and strung together like Russian nesting dolls of decreasing sizes that reach up to the apartment’s ceiling and then spread out like wildfire.  These columns create a circuitous route through the apartment, impeding any normal comings and goings of someone who might be visiting or living there.  They could also be made to feel like large redwood trees, their branches overhead or even stalactites, several of which have “dripped” down onto various bits of furniture.  There are several fanciful combinations to be discovered as a kitchen table offers a precarious foundation.

The installation is fun, more designee than sculptural, impressive for its scale, architectural in its ambitions (tree houses also come to mind) but eventually falls flat as an homage to “multiple narratives of San Diego's citizenry” according to Jarman, or what is in essence to this viewer, a testament to one’s metaphorical and transient lifestyle through the banality of a cardboard box.  Not exactly flattering.  The work is unable to convince us that we are part of a larger narrative and remains just what it is – cardboard boxes scooped up from the nearest retail outlet.  There is nothing to topple the monotony of the structures and even less to see how our stories fit inside.  Part of the problem I believe is the inability to interact with these towers, say for example, the possibility to construct your own column slash story instead of avoiding walking into one.


"Do we suppose that all she knows is that a rose is a rose is a rose is a rose." – Gertrude Stein
THIS IS A CITY could be perceived as the journey of several cardboard boxes from manufacturer to the recycle bin, subbing as our own birth and eventual recycling: "In the sweat of thy face shalt thou eat bread, till thou return unto the ground; for out of it wast thou taken: for dust thou art, and unto dust shalt thou return.”  I like stories, I think we all do, and I understand these are empty boxes to be filled with my own narratives and potential uses.  I am perplexed though.  I would have preferred Jarman’s work to stay simple, unassuming, something to be enjoyed and walked through like some enchanted forest.  That it not cloud my perception of how I should experience the work, despite his tender and earnest guidance, but that it exist solely as a friendly gesture, a welcoming handshake to not just any city, or this city, but my city.  How I move through this city or my imagination depends on how much I want to un-pack and share.  The Jarman’s have kept theirs sealed.  Either that or they missed a golden opportunity to offer one homeless citizen true relief by converting his cardboard bed into a real one, at least for the night sheltered from the storm.  Its impact would not have been mistaken for a possible narrative.
Kevin Freitas

Excerpt from the statement by the artists:

“A cardboard box is assembled on a factory line, and then filled with consumer goods on a different line.  The box travels from its shipping facility in one state to a retail store in another.  When the goods are purchased, the box journeys to the consumer s house, where it is unpacked and placed in a hallway.  The box is discovered by a neighbor, who picks it up and uses it to house his/her belongings, as they are preparing for a move across town.  Having made the trip, the box is placed in an attic for many years before finally being discarded in a recycling bin.  The box is subsequently picked up by a homeless citizen, who uses the box to house their blankets by day and shelter them at night.  We suppose this narrative only to illustrate the possible histories and narratives imbued in a cardboard box and to argue that it is a suitable material to play document the city.” 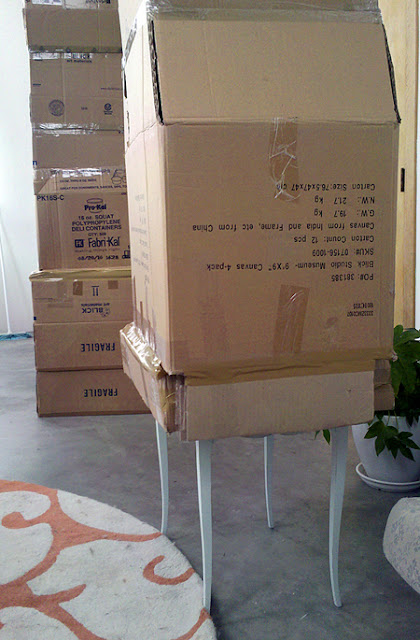