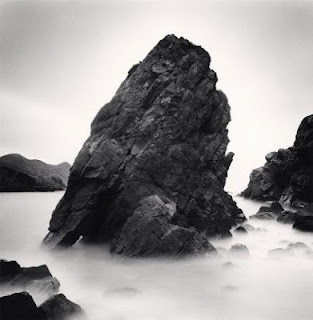 Michael Kenna’s New and Classic Images exhibition at Joseph Bellows Gallery comprise a selection of  black and white ethereal and contemplative photographs. These fifty images span twenty years and thirteen countries..Kenna has been photographing for forty years and still relies on Kodak film in spite of the growing digital marketplace. He makes his own sepia toned silver gelatin prints in a traditional darkroom, creating precisely7 ¾” square images, which are dry mounted on 16” x 20” museum board. He doesn’t deviate from his methods and there seems to be no reason he should. His remarkably atmospheric and surreal architectural and landscape scenes are uninhabited but hint at human intervention.

Kenna has traveled the world taking photographs and has spent countless nights outdoors using sometimes ten to twelve hour exposure times to create his vision of the locations he is capturing on film. Some images possess the stark contrast of darkness against the drama of focused light like a Rembrandt painting while others portray a dreaminess - a misting and blurring of objects against a distant cloudless sky.  One group of images in the show closely resembles delicate line drawings or detailed paintings rather than photographs.  Many of Kenna’s images were photographed in Southeast Asia and directly reference Chinese or Japanese brush painting.

Michael Kenna’s work possesses a universal classic style with a unique personal vision – seemingly a travelogue marking places he has been and places we would all like to visit.
Posted by Patricia at 9:54 PM