How amazing is it that we can see a live talk with one of the world’s most famous artist and even get to ask questions? With a translator, this was such a special experience on zoom thanks to the San Diego Museum of Art.   The exhibition is on view until August 14 at the first floor galleries 14 and 15. 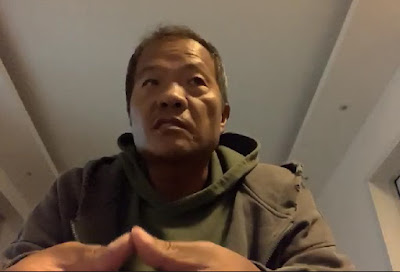 Wang Qingsong was born in 1966 into poor family from north east China. His father died when he was a teen, and his mother was uneducated and so he needed to assume responsibility for his family. He studied hard.  He took 8 years to get into art school. Out of 2000 applicant only 20 got into art school, so this was a true sign of talent.

By 1992, China has entered a period where market economy was all. In 1993, Qingsong became a professional oil painter and moved to Beijing, his first big city experience. He knew nothing of the stress and expense for food and shelter.

His own early works were very personal about his intimate life. He wanted a new way to express himself. At that time, only those in the government were allowed to have a camera and take pictures. It was rare to own a camera or go onto the street to take a photograph to capture a moment. He tried to make a fake certificate as a journalist, but that did not work out. And actually he did not want to make documentary statement like a photo journalist, but to use the word "document" as a noun to show the social and economic changes. He makes a statement by arranging the subjects and props as a composition as was done in painting.  He creates images that are critical of the Chinese life style and commercialism, and they pose the question, “What is important?” using sarcasm and even humor.

By1996, traditional values had broken down. People were excited to make lots of money and develop the city scape. His series about Social Mobility started 20 years ago with changes in people's mentality, but now also physical environments have changes. Traditional cities have become cities of skyscrapers. One square meter was $500 and now 20 times as expensive ie. $10,000.  It was more friendly and small and local, now people are estranged.

World-wide his work is often seen as either anti-capitalism or anti-socialism which are opposite from each other! His personal overview of the world is one where he poses his own questions. When asked what the Chinese thought of his work, he states that most Chinese like his work a lot because he is seen to attack capitalism and also because the works reflects history and how China like to surpass other countries. Chinese admire progress.

His biggest worry is that humans have lost the capacity to be empathetic and he wants to challenge them. But it is the sarcasm in the work where he most successfully makes his point. 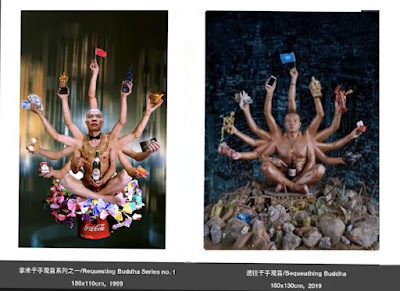 China is all about being the second largest market economy, but the cities were full of rubble as shown in this before and after Buddha duo above.

Qingsong thinks not only about differences between east and west cultural difference, but he seems fascinated with concepts of past, present, future. History is not truth, but what is recorded by human beings. And his interpretations shine new light on what we might think we know. 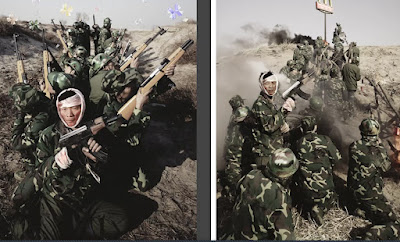 We are showing just a few details from some of these works that made from 45 meter rolls of photographic paper.  They follow the tradition of oriental scrolls. 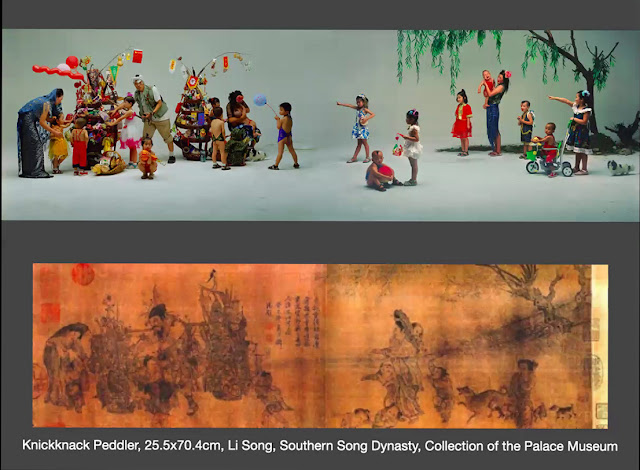 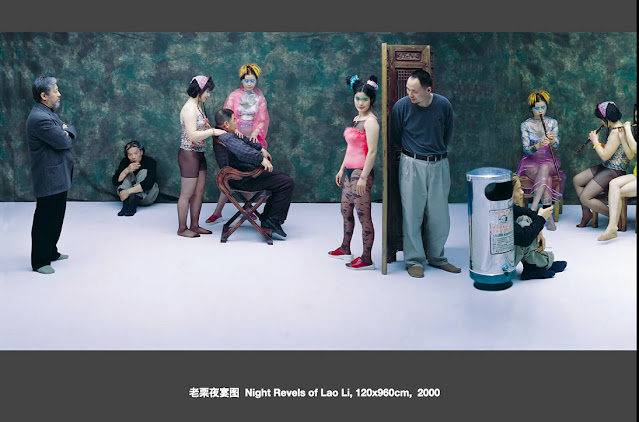 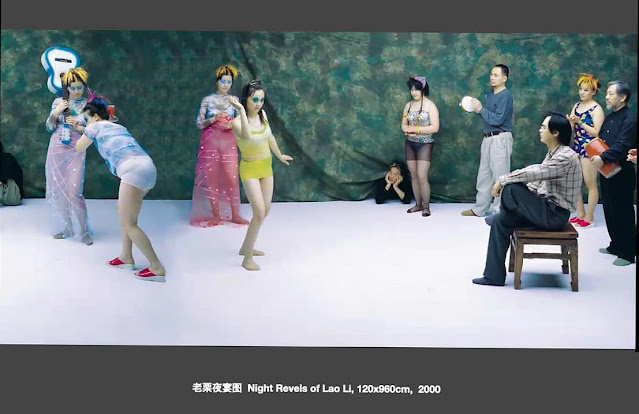 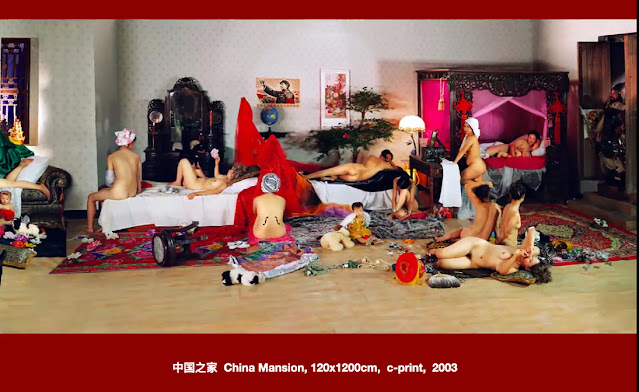 Education has become an industry. The goal is to make work force with a higher degree of skills. There was lots of aid in the beginning to make this happen.  But now school has become so expensive. Every course was designed to increase the economy. When Qingsong went to school, he was allowed to be inspired and passionate about art. This is no longer true. Teachers are not so engaged with the student who seem only interested in making money. Now it is easier to get into art school and the work is more proscribed. People are not taught to be responsible and so they are more selfish and self-centered. 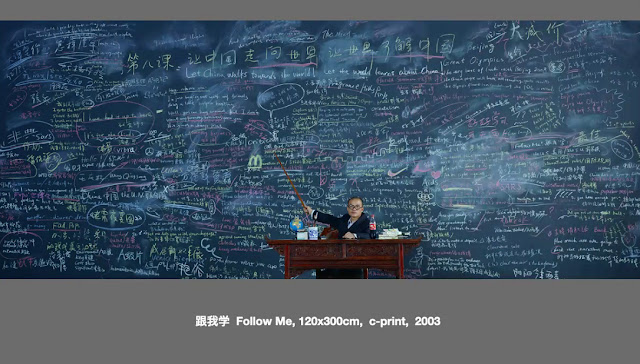 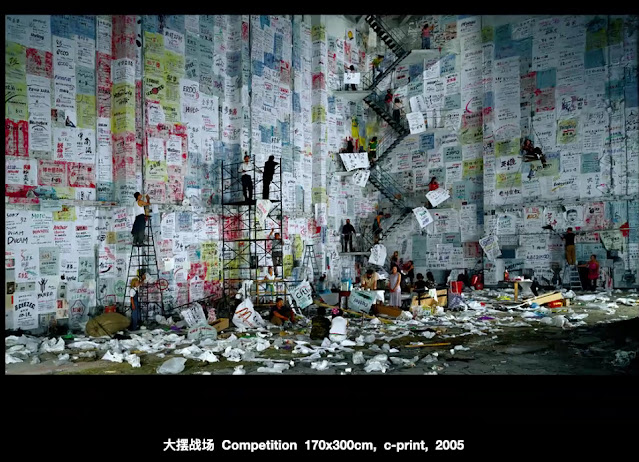 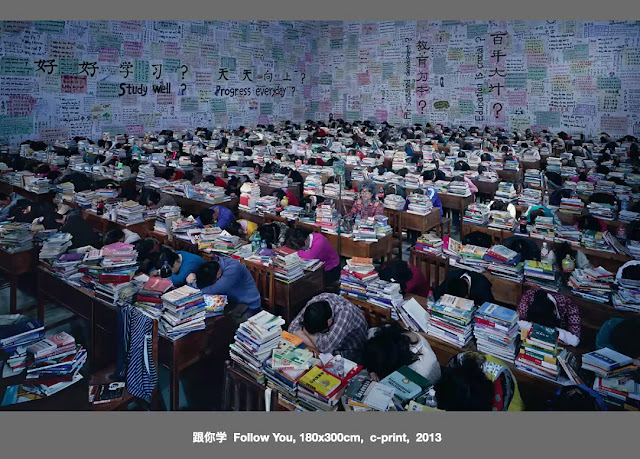