Amy Franceschini and the Future Farmers 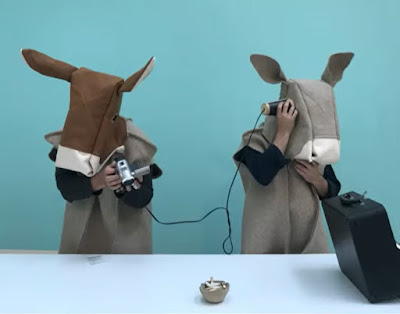 I am so grateful to get to hear from these artists arranged by UCSD. There is no doubt in my mind that these zoom presentation give the listeners a chance to really understand their lives and their work. It is a silver lining from the pandemic and I hope once we are able to meet again, these zoom talks continue.

When you read the blurb about this talk, unless you are an art historian or art critic, you have no idea what will be presented. Hearing them speak is so much more revealing and it is not that the words written are true, but most of us don’t think about projects in long sentences and generalities. Reading about architecture as human settlements becomes building something where people gather. Agriculture becomes Agri-culture

Amy Franceschini was a direct action activist but she found that approach unaligned with her personality. She is constantly trying to figure out if art is a way to activate change but in a gentler way. She is not always convinced that art is the path and continues to explore research as well. But her start was an experience that set her path. A large format camera that took two to use made her realize she wanted collaborations. Franceschini is part of Future Farmers founded in 1995 as an interdisciplinary group interested in scaling up projects and working collaboratively.

Future Farmers does projects that last a long duration of time and that evolve as one of their main attributes. The project works because being vulnerable enables project participation and large group of people are involved and help guide the course of each. During the onsite projects, they also do museum shows.  Her group has become good at negotiating with museum on what can be presented and who can speak for the art.

Victory Gardens 2007 was a chance to push out from the containment of the Museum. Researching to find out what used to exist on the site has become a hallmark.  They bring something back in a new form. In San Francisco, that meant garden plots that were tended by all the local organizations that were interested in urban gardens.

Future Farmers was then invited to Italy. They were in a place that used to have wild horses and ended up using the horse metaphor to connect from community to community. The belly of their constructed horse was covered in blackboard paint and people were asked to write what they wanted in their farming community. Another hallmark is creating something that makes people ask questions as a way to start a conversation. Eventually, they buildt a tree house to house a radio station to broadcast the conversations. Their focus was on farms growing grains in high altitudes as they were endangered. In an exchange for a farmer interview, they would work in the farm and that gave a different perspective for conversations. Grains and garden and all things farm is a third hallmark.


In Olso there is still the right to roam. They decided to uses seeds and grain in Norway and the resulting flat bread that was an ancient custom of storing grain. The planted cropped and built a special three part oven to encompass all the ways that flat bread is made. The space became activated and is now after 6 years permanent. They started a grain exchange and traveled to Turkey by boat, foot, and truck, where many of the grain originated. They then roamed full circle coming back to the bread ovens and converting them into sound sculptures for a brief celebration. The work on display in the museum is boat shaped with a shelf for grains and a live feed video of the voyage.

Amy Franceschini and the Future Farmers have a current project in San Jose which reached up to the skies and down in the earth. They collaborated with a school’s marching bands and the ceramic department.  The band marched on the clay, wedging it and making shapes. Ceramicist formed clay instruments and together unique compositions of music were created.

I recommend that you watch the video and let your world widen as mine has. Also check out their website with so many more projects and artifacts from exhibitions. Future Farmers