Forty years ago, Mark Quint opened a small gallery in La Jolla, where he’d been living since 1957, when his family first moved there. He’d graduated from the San Francisco Art Institute, taught art for several years, and had a good eye, eclectic taste, and a gift for finding and befriending cutting-edge contemporary artists.

Quint would own and design 14 larger galleries over the years, most of them in La Jolla, until he decided to move his base to an industrial park in Bay Ho in 2016, which gave him more space for his collections and exhibitions but was a less inviting district.

Now, in celebration of his 40th anniversary as a gallerist, he’s back in his hometown with two new venues, Quint Gallery on the east side of Girard Avenue, and Quint ONE on the west.

The main gallery is an impressive place, including a welcoming lobby filled with pieces by some of Quint’s favorite local artists, a large exhibition space and another small one called The Museum Of __ , designated for themed exhibits. There’s also an intriguing gift shop, and a bookstore featuring artists’ books published by Quint Editions.

Currently on view through May 15 is Walking On Water, a must-see installation by Chilean-born, New York-based artist/architect/activist Alfredo Jaar. Originally created in 1992, the piece features a series of light boxes containing large-scale photographs of a hopeful asylum-seeker crossing the Rio Grande. Each light box is backed by a mirror, revealing smaller lightboxes that show different views of the dangerous journey. The piece, on view through the generosity of its owners who have a special room for it in their home but wanted others to be able to see it, is as timely as ever today.

To learn more about the artist, watch the hour-long video interview with Hugh Davies, former director of the Museum of Contemporary Art San Diego (MCASD), a longtime friend who gave Jaar his first U.S. exhibition in 1990.  https://www.youtube.com/watch?v=ZI6J12IInYI or watch below:


In The Museum Of __ , Richard Ross’s Museology exhibit of photographs taken in museums’ back rooms just closed April 24. Next up on April 27 will be Gen Z: The Conventional Rebel, curated by Sarah Cook and Mabel Deshommes, a pair of 20-year-old student artists who promise an inside look into the hearts and minds of their generation.

Before leaving the gallery, ask for a free membership card to The Museum Of __.   It’s a wallet-size souvenir designed by Kelsey Brookes that will give you 10% off any gift-shop purchase.

After Walking on Water, cross the street to ONE, a satellite space devoted to offering each visitor a personal experience with a single, monumental work of art. On view through May 15 is a fascinating display of the dynamic nature of light and color—a wall-size artwork by French artist Adrien Couvrat titled Partition. It’s a grid of 21 striated paintings that seem to change as you walk past them. Each painting is layered; the first layer of acrylic provides thickness, then the artist rakes tiny ridges through the paint, finally spray-painting different colors at various angles on top. 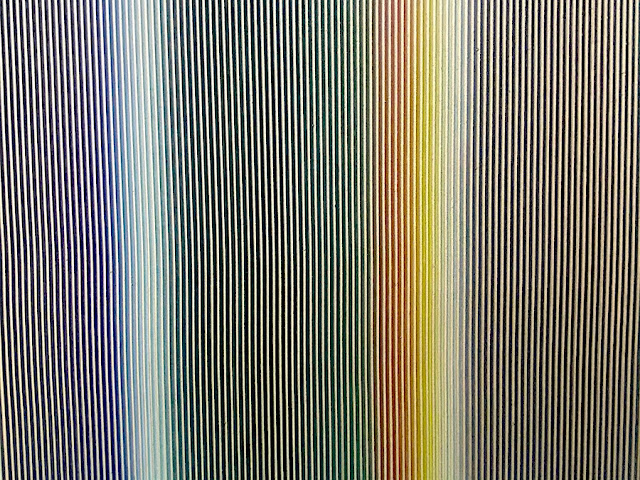 And it’s not just that the piece changes as you walk by it. Get up close, standing on the left side of the grid, and you’ll see flat blocks of strong color to your right—no striations. Standing on the right side, looking left, you’ll see narrow, paler-colored stripes.

The true magic of Partition can’t be captured in a photo; you have to see it in person. It’s really revealing to look at the piece from different viewpoints and see how things change as you change your perspective.

The artist, who lives and works in Paris, was introduced here by ONE’s curator/director Ingrid Westlake, who is also from France and discovered him there. “What we have here is slow art,” she said. “Things are never what they seem. Move a little, change your perspective, adopt a different point of view and you’ll see true colors revealed. It’s optical, philosophical and essential, all activated in these stunning acrylic paintings.”

There’s also a back room at ONE, where you can see other artworks, including one more by Couvrat. Don’t miss the cardboard forest by Eva Jospin, another French artist, best known for her elaborate and often large-scale cardboard sculptures, as well as for being the daughter of Lionel Jospin, prime minister of France from 1997-2002.


Walking On Water, on view through May 15
Quint Gallery
7655 Girard Avenue, La Jolla

Partition, on view through May 15
Quint ONE
7722 Girard Avenue, La Jolla

Both galleries open by appointment only, Tues-Sat, 11 a.m.-5 p.m. Face coverings required. For appointments, go to glad@quintgallery.com or text the gallery at 858.454.3409.

Lonnie Burstein Hewitt is an award-winning author/lyricist/playwright who has written about arts and lifestyle for the La Jolla Light and other local media for over a dozen years. You can reach her at hew2@sbcglobal.net/